Denis Shapovalov has reached his first Grand Slam quarterfinal by beating No. 7 seed David Goffin 6-7 (0), 6-3, 6-4, 6-3 at the U.S. Open. The 21-year-old left-hander, who is seeded 12th at Flushing Meadows, also is the first man from Canada to make it to the final eight in tournament history.

Denis Shapovalov has become the first Canadian to reach the quarter-finals in men's singles at the U.S. Open following a four-set victory over No. 7 seed David Goffin of Belgium on Sunday.

He will face No. 20 seed Pablo Carreno Busta of Spain in the quarters. The Spaniard got into the final eight when No. 1 seed Novak Djokovic was defaulted — the tennis equivalent of an ejection — from their fourth-round match after he accidentally hit a line judge with a tennis ball.

Shapovalov was broken only once and it came in the fourth set, while converting five break points against his opponent. He fired 13 aces and 52 winners. 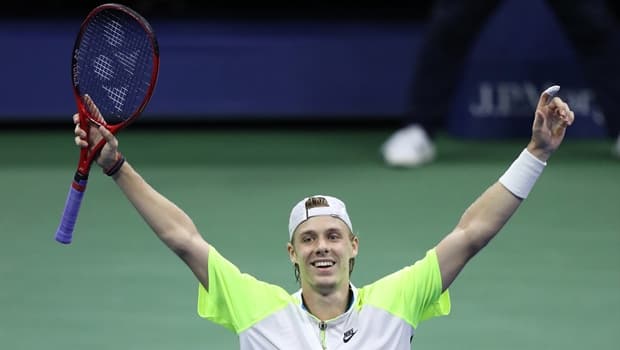 4 months agoVideo
1:33
Denis Shapovalov became the 1st Canadian man to reach the quarter-finals at the US Open. 1:33

Shapovalov gave up the first set on a tiebreaker before taking the next three.

He broke Goffin for the first time on his sixth opportunity, with some help, as the Belgian double faulted to give the Canadian a 3-1 lead and a chance to even things in the second set.

The 21-year-old left-hander broke Goffin a second time in the opening game of the third set, then held serve to go up 2-0 and cruised from there for a 2-1 advantage.

Shapovalov converted his third break point to make it 2-1 in the fourth set, and Goffin couldn't hold serve with the Canadian breaking him a fourth time to go up 4-1. 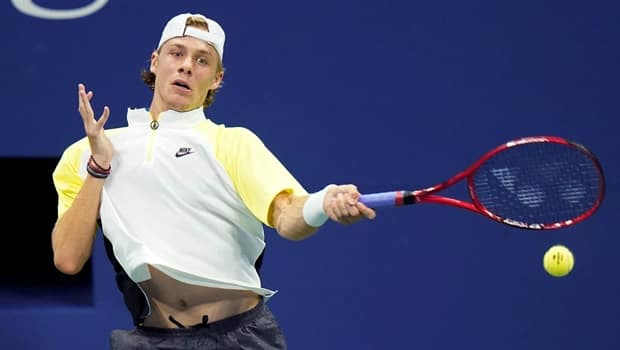 Goffin hung around and finally broke Shapovalov to make it 5-3 only for the native of Richmond Hill, Ont., to convert a break point on the next game to take the match.

Shapovalov, ranked No. 17 but seeded 12th at the Grand Slam tournament that's missing some top stars, came into the match 0-1 against 29-year-old Goffin in his career. The previous loss came last year on a hardcourt ATP 500 event in Tokyo.

With reigning U.S. Open champion Rafael Nadal, who cited concerns about travelling amid the pandemic, and Roger Federer, sidelined after two knee operations, not in the field, the 33-year-old Djokovic from Serbia was expected to claim a fourth trophy in New York.

In 2017, Shapovalov was also defaulted from a Davis Cup match against Britain when he accidentally hit the chair umpire in the face with a ball.

"I've been through that myself. Honestly, I feel awful for him. I feel terrible for everybody. Nobody wants to be in this situation," Shapovalov said. "Just a fluke. It's accidents like this that happen. Same thing with me."

Djokovic's departure means there is no man left in the field who has won a Grand Slam singles title. Whoever emerges as champion will be the first first-time major trophy winner in men's tennis since 2014, when Marin Cilic won the U.S. Open.

Plus, each of the last 13 Grand Slam trophies had been won by a member of the Big Three of Federer, Nadal and Djokovic.

"This is definitely not the way we wanted to have a new Grand Slam champion," Shapovalov said, before noting: "It's been getting pretty boring with these three guys winning every tournament."

Shapovalov, from Richmond Hill, Ont., is one of three Canadian men to play into the Round of 16, along with Felix Auger-Aliassime of Montreal and Vasek Pospisil of Vancouver.

That's the most Canadian men to have advanced to the fourth round of the event in the same year. But no Canadian man had reached the quarter-finals in the history of the U.S. Open, going 0-12 in the round of 16 before Shapovalov on Sunday.

Bianca Andreescu of Mississauga, Ont., won the women's singles championship in New York a year ago.

Auger-Aliassime and Pospisil both play their respective fourth-round matches Monday.