Canadian tennis player Denis Shapovalov apologized on his Twitter account Monday after he hit the umpire in the eye with a ball. The International Tennis Federation has fined the Canadian $7,000 US. He avoided the maximum fine of $12,000 as the incident was not deemed intentional.

'I feel ashamed for my unprofessional behaviour,' says Canadian teenager 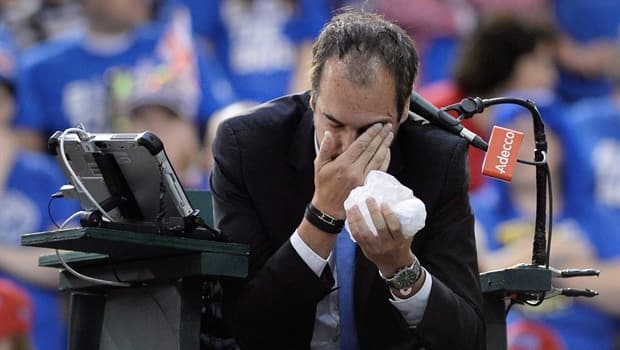 4 years ago
1:24
Canada fell 3-2 to Great Britain in their Davis Cup World Group tie after Shapovalov was defaulted after accidentally firing a tennis ball at the chair umpire 1:24

The International Tennis Federation fined Canadian tennis player Denis Shapovalov $7,000 US Monday after he unintentionally hit chair umpire Arnaud Gabas in the eye with a ball. He avoided the maximum fine of $12,000 as the incident was not considered intentional.

The 17-year-old also apologized Monday on his Twitter account after the outburst caused Canada to lose it's Davis Cup tie with Great Britain.

Great Britain's Kyle Edmund was leading the match 6-3 6-4 2-1 at the time. The World Group first-round tie was sqaured at two after Canadian Vasek Pospisil edged Dan Evans in four sets earlier on Sunday.

Great Britain will now play France in the Davis Cup quarter-finals in April.

Pospisil tweeted his support for Shapovalov after the incident.

No one is nicer or carries themselves better for a 17 y/o than Shapovalov. Everyone can see that today was an accident. Can happen to anyone