Bianca Andreescu and Denis Shapovalov, along with fellow Canadians Felix Auger-Aliassime and Milos Raonic all advanced past the weekend at the BNP Paribas Open in Indian Wells, Calif.

Serena Williams retires from match due to viral illness

Andreescu only needed 56 minutes to win her matchup against Stefanie Voegele of Switzerland, firing five aces en route to a 6-1, 6-2 victory in third-round action at the Masters-level tennis tournament.

Meanwhile, Denis Shapovalov of Richmond Hilll, Ont., won his second-round matchup on the men's side against American Steve Johnson on Sunday, taking it 6-3, 6-4 in one hour 21 minutes.

Andreescu, playing in her Indian Wells debut, has had a strong start to the WTA season with her latest victory improving her record to 24-3.

WATCH | Andreescu advances to the 4th round: 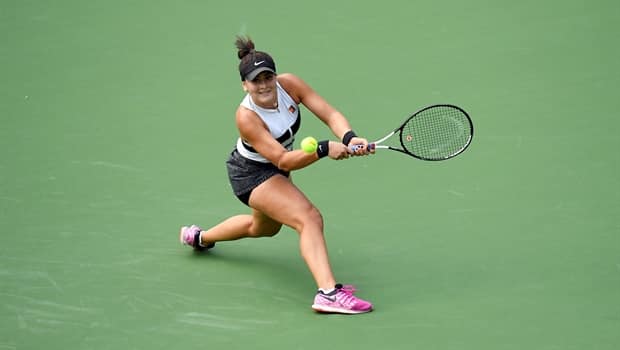 Canadian Bianca Andreescu off to 4th round at Indian Wells

2 years agoVideo
0:44
The 18-year-old cruised over Stefanie Voegele of Switzerland in straight sets to reach the 4th round at the Indian Wells Masters in California. 0:44

The Mississauga, Ont., native moved up to No. 60 in the world rankings last Monday after reaching the semifinals at the Mexico Open.

The teen was a distant No. 152 at the start of the season.

Shapovalov, who fired eight aces past Johnson, joins Milos Raonic and Felix Auger-Aliassime in the third round after his fellow Canadians won on Saturday to advance.

WATCH | Shapovalov joins fellow Canadians Auger-Aliassime and Raonic in Round of 32: 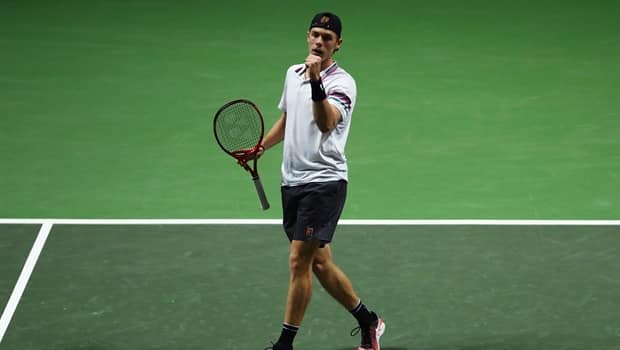 Shapovalov joins Raonic, Auger-Aliassime in round of 32 at Indian Wells

Serena Williams' return to tennis after a five-week break ended early with her retiring because of a viral illness on Sunday.

Williams raced to a 3-0 lead over two-time major champion Garbine Muguruza in their third-round match before dropping six straight games and the first set, 6-3.

"By the score, it might have looked like I started well, but I was not feeling at all well physically," Williams said in a statement distributed by tournament officials.

During the changeover between sets, Williams called for a trainer. She went back out and lost the first game of the second set. The match was soon declared over and Williams walked off the court.

"Before the match, I did not feel great and then it just got worse with every second; extreme dizziness and extreme fatigue," Williams said. "I will focus on getting better and start preparing for Miami."

Muguruza is the only player to have beaten both Serena and Venus Williams in tournament finals.

"It's really a weird feeling because I don't feel like I won the match point and well done, good match," Muguruza said. "It was just like, `Man, we'll play next time."'

The Spaniard credited Williams for being "very dominating" from the start of the match.

"I had to adapt a little bit my position in the court, the way I was hitting, and it took me a few games to kind of do it," Muguruza said. "Once I did it, I felt much more comfortable."

Williams was playing her first tournament since the Australian Open in late January, when she lost in the quarter-finals.

After a first-round bye in Indian Wells, she beat Victoria Azarenka 7-5, 6-3 on Friday night.

It's the second time in four years that Williams has withdrawn from the tournament. She returned to the desert in 2015 after a 15-year boycott. That year she reached the semifinals before withdrawing against Simona Halep. She missed 2017 because of pregnancy.

Earlier, Roger Federer beat Peter Gojowczyk 6-1, 7-5 in the second round.

Federer saved six of seven break chances against the German after losing just two points on his serve in the first set.

Federer has reached the final of the desert tournament in his last four appearances, winning two years ago. In all, he owns five titles at Indian Wells. He won his 100th career title in Dubai last week.

Kozlova led 6-5 and was within two points of winning the first set before Halep forced a tiebreaker in their first meeting. Halep dominated the tiebreaker, urged on by a large contingent of Romanian fans at Indian Wells Tennis Garden.

No. 16 Fabio Fognini and No. 20 David Goffin were beaten.

On the women's side, No. 7 Kiki Bertens and No. 18 Qiang Wang advanced.