Montreal's Felix Auger-Aliassime cruised past Greece's Stefanos Tsitsipas 6-4, 6-2 on Saturday afternoon in the Round of 64 at the ATP Indian Wells Masters tournament in Indian Wells, Calif.

Felix Auger-Aliassime's first career match against a top-10 player has put the ATP Tour on notice.

The 18-year-old from Montreal posted a commanding 6-4, 6-2 victory over Greece's Stefanos Tsitsipas on Saturday at the BNP Paribas Open. Auger-Aliassime had beaten Tsitsipas, 20, all three times they faced each other in the junior ranks, but this was their first meeting as professionals.

"I didn't know what to expect today because he's a completely different player [from the juniors]," Auger-Aliassime said. "Again, I believe in myself. I thought I had my chances. I served really well today, so that was obviously a big key."

Less than a week ago, Tsitsipas jumped into the top 10 for the first time.

Auger-Aliassime has faced only three players ranked in the top 20 so far in his young career and won all three matches. 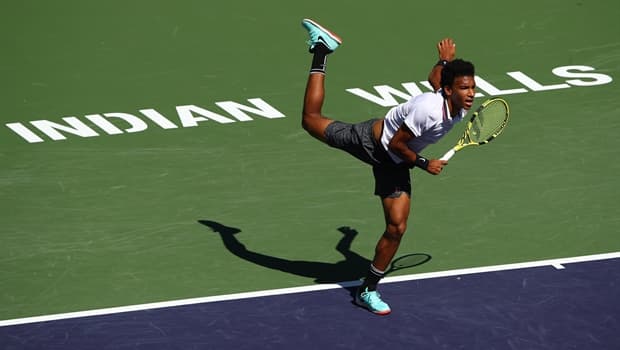 Auger-Aliassime through to 3rd round at Indian Wells

2 years agoVideo
0:45
Montreal's Felix Auger-Aliassime defeated World No. 10 Stefanos Tsitsipas 6-4, 6-2 to book a spot in the 3rd round at the Indian Wells Masters in California. 0:45

He defeated Lucas Pouille of France (No. 18) at the Rogers Cup in Toronto last summer and upset No. 16 Fabio Fognini of Italy in the first round of the ATP 500 tournament in Rio de Janeiro two weeks ago.

Fellow Canadian Milos Raonic from Thornhill, Ont., downed American Sam Querrey 7-6 (1), 6-4 to also advance into the third round. Raonic, who had a first-round bye, defeated Querrey in the quarterfinals at Indian Wells a year ago. 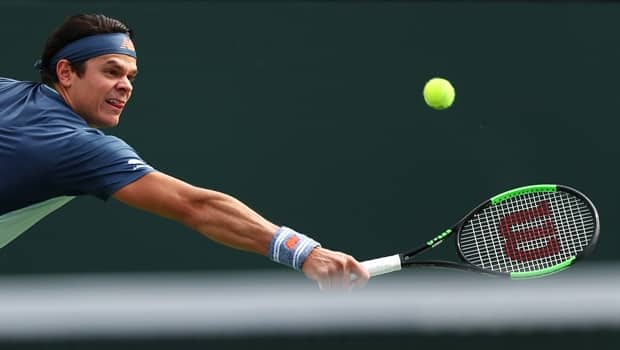 Raonic rolls into 3rd round at Indian Wells

If there were nerves, Auger-Aliassime didn't let them show. Instead, it was his older opponent who seemed a little flat on Saturday.

Tsitsipas said the Canadian played very well with lots of speed and energy.

"You always feel like he's going to hit very hard, but then you don't really know what to expect, how hard he's going to hit the ball. So you're always caught out of position," Tsitsipas said. "He deserves every single piece of that victory."

Auger-Aliassime served harder than Tsitsipas did and claimed more territory by playing from much further inside the court.

Auger-Aliassime said he was able to keep his opponent on his back foot and it wasn't until late in the first set when Tsitsipas moved closer.

"I was surprised to see him a lot of times giving himself a lot of space," Auger-Aliassime said.

Afterwards, Tsitsipas pointed to the high-bouncing ball and his opponent's power as two factors that backed off the baseline.

Auger-Aliassime was especially aggressive on the second-serve returns. Tsitsipas won just 38 per cent of points when he missed his first delivery.

The key moment came early in a 12 minute 16 second game in the first set. Auger-Aliassime had just broken Tsitsipas to take a 2-1 lead, but he was in trouble after consecutive double faults.

He saved a total of six break points in that game, consolidating the break to lead 3-1 and never looked back.

"I thought I was able to be pretty aggressive, like all the other matches we played in juniors," Auger-Aliassime said. "That's my style of play. For some reason it fits well with his."

This season, Auger-Aliassime has played in India, Australia and a Davis Cup in tie Bratislava, Slovakia to start the year before heading down to the South American clay-court swing for the first time.

After a first-round loss in Buenos Aires, Argentina he reached the final in Rio as a wild card. Auger-Aliassime lost to Laslo Djere and reached the quarterfinals the following week in Sao Paulo — where he also lost to Djere.

The effort on the clay brought him to No. 58 in the rankings. Auger-Aliassime will need two more wins this tournament to break into the top 50.

In the third round Monday, he will play the winner of a match later Saturday between No. 21 Roberto Bautista Agut of Spain, and Japan's Yoshihito Nishioka.

Raonic next faces American qualifier Marcos Giron, who upset No. 23 seed Alex de Minaur of Australia in the second round earlier Saturday.

Auger-Aliassime's win came less than 24 hours after another 18-year-old Canadian, Bianca Andreescu of Mississauga, Ont., also reached the third round in her Indian Wells debut. She will play qualifier Stefanie Voegele of Switzerland on Sunday.