Canada's Eugenie Bouchard started the Australian Open off on the right foot, earning a straight sets win on Monday as the tournament got underway, while Vasek Pospisil lost in four sets to French veteran Gilles Simon. 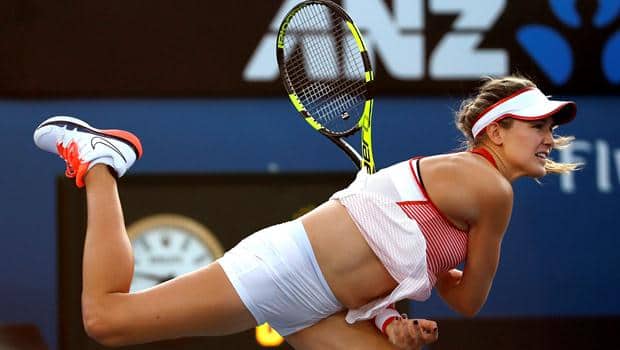 5 years ago
2:00
Canadian Eugenie Bouchard defeated Aleksandra Krunic of Serbia 6-3, 6-4 in her first round match at the Australian Open on Monday. 2:00

Canada's Eugenie Bouchard started the Australian Open off on the right foot, earning a straight sets win on Monday as the tournament got underway.

Bouchard, unseeded after plummeting in the rankings last year, defeated Aleksandra Krunic of Serbia 6-3, 6-4. She received enthusiastic support from several fans, the so-called "Genie's Army" that first formed during her run to the semifinals two years ago at the Melbourne tournament.

The Montreal native reached the quarters in Australia last year, but her year quickly took a turn, with a painful summer that included first-round exits at the French Open, Wimbledon and Rogers Cup.

A bounce-back performance at the U.S. Open in September was marred by a concussion suffered in the locker room, leading to a forfeited match and a lawsuit. She is currently ranked 37th in the world.

Bouchard, who turns 22 in February, has a new coach in Thomas Hogstedt, and finished as a runner-up in last week's Hobart International in Tasmania.

Bouchard has a tough assignment in her next outing, however, facing No. 4 seed Aggie Radwanska. The Polish player, who's at a career-high in the women's rankings, defeated American Christina McHale in straight sets on Monday.

Pospisil done in by unforced errors

Canadian Vasek Pospisil couldn't make it out of the first round, falling in four sets to French veteran Gilles Simon on Monday.

Unforced errors cost the Vancouver native heavily — Pospisil had 55 of them compared to just 18 for Simon.

Pospisil used his powerful serve to win the first set in 45 minutes. He held an 8-0 edge in aces but committed 16 unforced errors.

Trailing 3-1 in the second set, Pospisil called a medical timeout and went through stretching exercises on his lower body with a trainer, but returned to play shortly after. Simon went on to win the set in 52 minutes as Pospisil made 17 more unforced errors compared to the Frenchman's three.

Simon needed only 31 minutes to win the third set and 39 minutes to take the fourth, which ended when Pospisil returned a serve long on match point.

Canada's Milos Raonic, the 13th seed in the men's draw, plays his opening-round match against France's Lucas Pouille on Tuesday.

Williams, who just missed a calendar-year Grand Slam in 2015 when she lost in the U.S. Open semifinals, was helped by 12 double-faults by the Italian player, including on break point in the 11th game of the second set to give Williams a 6-5 lead.

The 21-time major champion held her service at love in the next game, including two aces and a service winner, to close out the match in one hour 45 minutes.

Williams appeared to show no soreness from recent inflammation in her left knee.

"It wasn't quick, so that actually worked to my advantage as well," Williams said. "I think I was able to stay in it and stay calm today and I think that's what matters most."

Novak Djokovic took his first steps toward a sixth Open title with a 6-3, 6-2, 6-4 win over Chung Hyeon of South Korea at Rod Laver Arena.

The defending champion then faced questions from reporters about a BBC and Buzzfeed report on the eve of the tournament that alleged match-fixing has occurred, among some current and ranked players.

Djokovic said that as far as he was aware there was no longer a problem with what he described as a "crime in sport" at the top level of tennis, but added that he had once been approached indirectly to throw a match.

"I was not approached directly, I was approached through people that were with my team," he said. "Of course, we threw it away right away. The guy that was trying to talk to me, he didn't even get to me directly. There was nothing out of it.

"Unfortunately, there were some, in those times, those days, rumours, some talk, some people were going around. They were dealt with. In the last six, seven years, I haven't heard anything similar."

In 2007, Djokovic said an approach had been made offering him $200,000 US to throw a match at the St Petersburg Open in Russia, a tournament he did not ultimately play in.

The 28-year-old Serb said that although he was confident there was no longer a problem at the top level, he could not speak for further down the tennis rankings.

Roger Federer advanced to the second round, setting a record just by showing up.

The No. 3-seeded Swiss star is appearing in a record 65th consecutive major, an impressive run that started at the Australian Open in 2000. Federer had little trouble in beating Nikoloz Basilashvili of Georgia 6-2, 6-1, 6-2.

Federer, who has won four Australian Open titles among his 17 majors, faces Alexandr Dolgopolov in the second round and could face No. 27 Grigor Dimitrov in the third.

The 34-year-old Federer hasn't won a Grand Slam title since Wimbledon in 2012.

Addressing the match-fixing report after his win, Federer said if players are suspected of corruption, he wants names.

"I would love to hear names," he said. "Then at least it's concrete stuff and you can actually debate about it. Was it the player? Was it the support team? Who was it? Was it before? Was it a doubles player, a singles player? Which Slam?"

"It's super serious and it's super important to maintain the integrity of our sport," Federer added. "So how high up does it go? The higher it goes, the more surprised I would be."

Fifth-seeded Maria Sharapova eased to a 6-1, 6-3 win over Nao Hibino to start the night program at Margaret Court Arena.

Sharapova, who pulled out of the Brisbane International with a left forearm injury, appeared to show no side effects from the ailment in her 73-minute win over the Japanese player.

Her only stumble came while serving for the match when she was broken by Hibino, but Sharapova broke back in the next game to clinch the match.

"I haven't played many matches in many weeks, it was great to come out here and start my season," Sharapova said.

The No. 328th-ranked Rubin received a wild card into the main draw as part of a reciprocal agreement between the U.S. and Australian tennis associations. The Long Island, New York, native had only played one previous Grand Slam match, a straight-sets loss to Argentina's Federico Delbonis in the first round of the 2014 U.S. Open.

Paire, who made a sartorial statement by wearing one red and one black shoe, had 61 winners compared to just 22 for the American, but also 72 unforced errors.

Afterword, the Frenchman didn't have many kind words for his opponent.

"I played against a not good player, but I was very bad today so that's it, I lost," he said. "I didn't know him and after this match, I said, yes, he's not a good player."

The 16th-seeded Wozniacki was up a service break in the second set. She received treatment on her right ankle during a medical time out in the third set.

It continued a downward spiral for Wozniacki at Melbourne Park, starting with a semifinal loss in 2011 and continuing with an exit at an earlier round every year since.

"I tried to keep my emotions inside and imagined I'm losing," she said.