It was a match between shot-makers new and old, but this time the young kid was ultimately given a tennis lesson by the flashy veteran. Tsonga casually hit a between-the-legs shot that kept him in a winning point, lunged with one of his patented stretch forehands for a winner, and generally provided the Margaret Court Arena crowd with 3 hours, 37 minutes of premium entertainment. 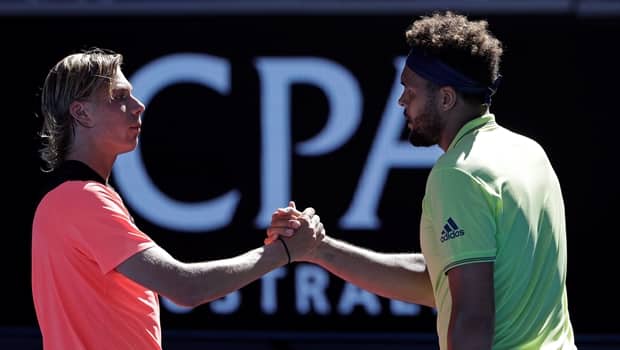 3 years ago
1:44
Shapovalov had a chance to serve out the match leading 5-3, but Tsonga would break the Canadian twice to win the match in five sets 1:44

Shapovalov, the 18-year-old from Richmond Hill, Ont., led 5-2 in the fifth set and had a chance to close out Tsonga at 5-3 on serve, couldn't hold off the 32-year-old Frenchman's rally.

"There's always nerves in a tennis match," Shapovalov said of the blown fifth-set lead. "I wasn't thinking about it much. Just didn't play a good game on my serve. Then he picked up his level. I'm just going to learn from it and keep going."

The result helped avenge the only time the players had met previously, at last year's U.S. Open, when Shapovalov won in straight sets.

"For me, I think it was an advantage to play him for the second time because I knew he was able to do things, crazy things like he did today," Tsonga said.

The win advances the 2008 finalist to the third round at Melbourne Park for the 10th time. He's never lost a second-round match at the Australian Open.

Kyrgios overcame audio problems at Hisense Arena and complaining to chair umpire James Keothavong, who ended up turning off his microphone and later being hit in the head by a wayward tennis ball.

In what could be one of the most entertaining matches of the third round, Tsonga will play Australia's Nick Kyrgios, who beat Viktor Troicki in straight sets 7-5, 6-4, 7-6 (2).

"He's one of my idols," said No. 17-seeded Kyrgios, who reached the 2014 Wimbledon quarterfinals at age 19 and ranked 144th. "I'm looking forward to going out there and battling it out with him."

Second-seeded Caroline Wozniacki had to save two match points and come back from 5-1 and 40-15 down in the third set to beat No. 119-ranked Jana Fett.

"It's an important victory for me, I mean, he's a tough opponent. Leonardo is a player with big potential," said Nadal, who won the French and U.S. Opens last year but had his preparation for Australia delayed because of an injured right knee. "After a while without being on the competition ... second victory in a row, that's very important."

In the match preceding Nadal, Wozniacki felt like she was "one foot out the tournament" before winning six straight games to advance.

Grigor Dimitrov was pushed all the way in five sets before finally beating No. 186-ranked Mackenzie McDonald 4-6, 6-2, 6-4, 0-6, 8-6. McDonald, the 2016 NCAA champion, had never won a tour-level match before qualifying for the Australian Open.

At the other end of the experience spectrum, 15-year-old qualifier Marta Kostyuk followed up her first-round win over 25th-seeded Peng Shuai with a 6-3, 7-5 victory over wild-card entry Olivia Rogowska.

Things will get harder for her now, against fellow Ukrainian and No. 4-seeded Elina Svitolina, who had a 4-6, 6-2, 6-1 win over Katerina Siniakova.

Another Ukrainian, Kateryna Bondarenko, beat No. 15-seeded Anastasia Pavlyuchenkova 6-2, 6-3 and will next play No. 19 Magdalena Rybarikova.

Alize Cornet beat No. 12-seeded Julia Goerges 6-4, 6-3, knocking the sixth of eight seeds out of that quarter of the draw.

Ryan Harrison beat No. 31 Pablo Cuevas 6-4, 7-6 (5), 6-4 and Kyle Edmund had a straight-sets win over Denis Istomin — who beat then defending-champion Novak Djokovic in the second round here last year.