Denis Shapovalov pushed world No. 2 Novak Djokovic to the limit but lost 4-6, 6-1, 7-6 (4) on Friday as Canada was eliminated by Serbia from the ATP Cup's quarter-final.

Denis Shapovalov pushed world No. 2 Novak Djokovic to the limit but lost 4-6, 6-1, 7-6 (4) on Friday as Canada was eliminated by Serbia from the ATP Cup's quarter-final.

Shapovalov, ranked No. 14 in the world, had lost all four of his previous meetings with Djokovic.

Earlier, Montreal's Felix Auger-Aliassime fell to Dusan Lajovic 6-4, 6-2 in the first match of the quarter-final. 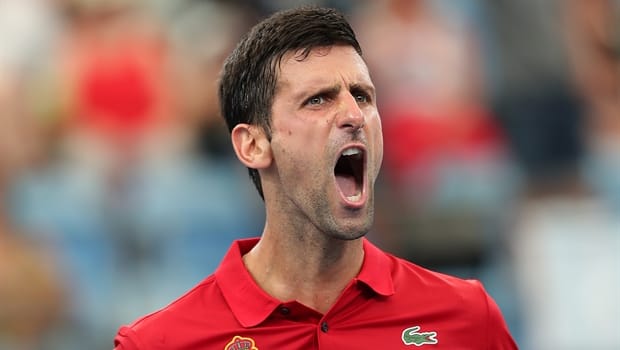 Host Australia advanced with a 2-1 win over Britain and Russia routed Argentina 3-0 in Thursday's quarter-finals.

The semifinals are set for Saturday and the final on Sunday.

Shapovalov pushed Djokovic to triple deuce in the first set, then dropped a clever volley during a lengthy rally to take a 5-4 lead. The young Canadian continued to push the pace on the next point, winning the set when Djokovic's return went into the net.

Djokovic shifted the momentum in the second set, with the pro-Serbian crowd getting behind him. With Djokovic leading 3-1, chair umpire Carlos Bernardes had to warn the crowd to be quiet.

After Djokovic took a 4-1 lead in the second set, Bernardes warned Canadian captain Peter Polansky that Shapovalov was not to directly address rowdy fans after the 20-year-old from Richmond Hill, Ont., took issue with how some spectators had spoken to him. 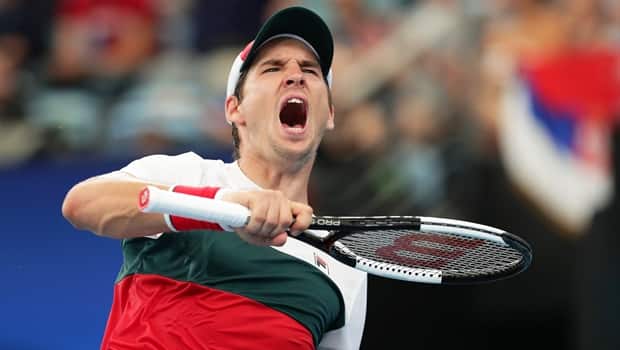 1 year agoVideo
1:03
Dusan Lajovic cruised past Felix Auger-Aliassime 6-4, 6-2, giving Serbia a 1-0 lead over Canada in the quarter-finals of the ATP Cup in Sydney, Australia. 1:03

Three points later, Bernardes lectured the crowd about their behaviour.

"The most important thing between all of us is respect," he said over the public address system. "If you don't want to watch tennis just go home. Don't disturb the people who are here to watch tennis."

Djokovic understood why Shapovalov was upset.

"They were engaged — sometimes a little bit too much. Denis was rightfully annoyed at times, you know, with the sounds, but it was a Davis Cup-like atmosphere, really," Djokovic explained. "I mean, ATP Cup brings this kind of opportunity for players to experience something they don't experience in 90 per cent of the tournaments."

Afterward, Shapovalov played down the incident.

"The crowd was so respectful today. Great crowd," he said.

Djokovic continued to roll through the second set, with Shapovalov requiring a medical timeout afterward.

A video review found that Djokovic's return on game point was slightly wide, tying the third set 5-5. Shapovalov jumped on the opportunity, winning the next point.

An ace for game point then gave Shapovalov a 6-5 lead, but his shoes stuck to the hardcourt when returning the next point, sailing it well over Djokovic's head to send it to a tiebreak.

Djokovic came out firing in the tiebreak, taking a 6-1 lead, but Shapovalov fired two aces to cut that lead to 6-3.

Holding serve, Djokovic then put a return into the net to cut into his own lead 6-4. On the next point, Shapovalov's return went too deep, advancing Serbia to the semifinals.

"That was so close, it could have gone in a different way easily. [Shapovalov] was playing terrific tennis," Djokovic said. "It felt, not a little bit, fully like I'm playing at home.

"When you have most of the stadium backing you up after every point, of course it makes a significant difference in terms of how you feel on the court. You find that strength. You find that motivation," Djokovic added. "That's why I try to cherish these kind of moments and take them with me anywhere I go."

Earlier Friday, aside from a brief 2-1 lead in the second set, Auger-Aliassime struggled against Lajovic.

Auger-Aliassime's return was just past the baseline for the match point, with Lajovic pumping his fist as the ball landed out of bounds.