Ashleigh Barty added to a career year by winning her first WTA Finals title in her first appearance at the season-ending event with a 6-4, 6-3 victory over defending champion Elina Svitolina of Ukraine on Sunday.

Straight-sets win adds to impressive 2019 season for world No. 1

Ashleigh Barty added to a career year by winning her first WTA Finals title in her first appearance at the season-ending event with a 6-4, 6-3 victory over defending champion Elina Svitolina of Ukraine on Sunday.

The title adds to the 23-year-old Australian's lengthy list of achievements in 2019 including her first Grand Slam title at the French Open. She also rose to the No. 1 ranking in the game and is now enjoying her 15th week in the top spot, becoming the first Australian to hold the year-end top spot.

"It feels like it's been a year that just hasn't stopped," Barty said from Shenzhen, China. "It's been a year of incredible ups and downs, I think more ups than downs. To cap it off with a very, very special night tonight in Shenzhen is really cool.

"To come through a week like this, you have to beat the best of the best."

Barty, who came through the round-robin standings with a 2-1 record this week, was unable to find a breakthrough against Svitolina until the 10th game when she created three break point opportunities, finally taking advantage of the third with a forehand return winner to score the opening set. 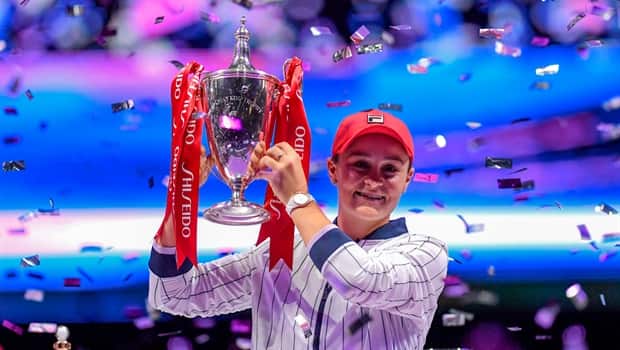 There were five service breaks in the first eight games of the second set, leaving Barty leading 5-3 and serving for the match.

Svitolina smacked a backhand crosscourt way wide on a second break point in that eighth game to seal her fate with Barty then serving out the match at love for her first career victory over the Ukrainian player in six matches.

"I think she was playing great match today," Svitolina said. "She was on it 100 per cent. Then it was very, very tough.

"I missed just little bit of my chances and that's what made the difference. But she's No. 1 in the world for a reason, so."

The season isn't over for Barty yet as she heads to Perth to lead the Australian Fed Cup team in the final against France next weekend.

"There's one more very important week to cap off what would be the most perfect year," Barty said. "This Fed Cup final is something I've been looking forward to for a long time.

"Playing for your country, for myself to play in front of my friends and family, representing Australia, wearing the green and gold. There's absolutely nothing better."

Barty takes home a record $4.42 million US cheque for the WTA Finals title, the richest winner's prize ever in the sport.