Richard Spooner captured the Nexen Cup Derby aboard Cristallo for the second year in a row and third time in their careers Sunday at the Spruce Meadows Summer Series. 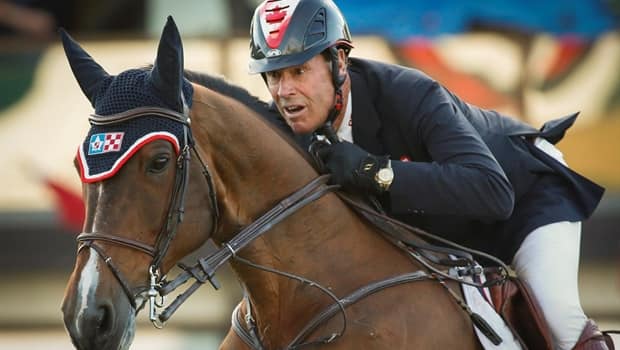 Richard Spooner captured the Nexen Cup Derby aboard Cristallo for the second year in a row and third time in their careers on Sunday at the Spruce Meadows Summer Series.

The American finished ahead of Canada's Lisa Carlsen and Daniel Coyle of Ireland, who finished second and third respectively.

Carlsen had four faults in the first round in 158.74 seconds that put them into the lead. But Spooner went last and had a rail for four faults in 162.45 seconds to tie Carlsen and force a jump-off.

Carlsen had a slip in the jump-off while finishing with four faults in 42.89 seconds. Spooner took the course slower and cleared in 52.38 seconds for the victory.

"When I watched (Lisa) go, I was sweating," Spooner said. "I was deeply concerned as fast as she was going. It was not going to be so easy. I got lucky."

Cristallo is an 18-year-old Holsteiner who is owned by Show Jumping Syndication Intl. Spooner and Cristallo also won the competition in 2012 and earned the derby victory Sunday.

Swail was the last to go in the jump-off and sped around the course in 35.56 seconds for the win.

"The plan was to run and try to keep it as smooth as possible," Swail said. "His left turn is not as good as is right, so the turn back to the Rolex (jump) I thought would be too slow for me to be the winner, but he actually did that quite good. I got a lot of time up to the last. He cut in and raced hard at it and jumped it really well."