Edinson Cavani scored a pair of goals as Uruguay eliminated Portugal 2-1 at the 2018 FIFA World Cup in Russia on Saturday.

Cavani scores twice to set up quarter-final showdown with France

Edinson Cavani upstaged Cristiano Ronaldo, first with his head and then with his right foot, and sent Uruguay to the World Cup quarter-finals.

Cavani scored twice and Ronaldo none Saturday to give Uruguay a 2-1 victory over Portugal. 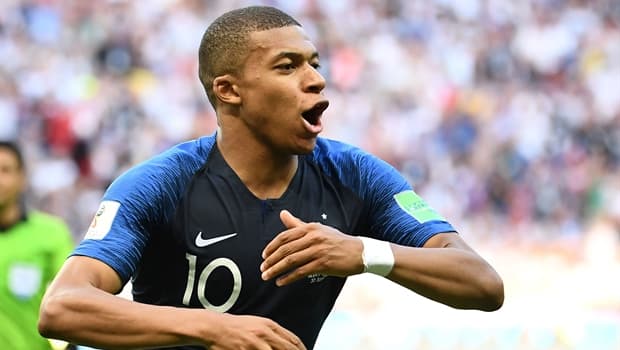 3 years ago
2:02
France and Uruguay advance to the FIFA World Cup quarter-finals, while Lionel Messi and Argentina, and Cristiano Ronaldo and Portugal are out. 2:02

On the same day Lionel Messi was sent home in Argentina's loss, the other "GOAT" at this tournament was also eliminated. It was two weeks ago that Ronaldo scored a hat trick in the same stadium against Spain, stroking his chin after the first goal to imply he was the "greatest of all time."

There was no goal from Ronaldo this time. Everywhere he went, the Portugal great was hounded by two or three Uruguayan defenders.

"We had our chances, but this is football," Ronaldo said. "We have to keep our heads high. We gave our best. The team played well. As the team captain I am proud of this group. Everyone worked hard to make sure things went well."

It was Cavani who instead took the spotlight. He combined with Luis Suarez to compete a series of precision passes to give Uruguay the early advantage with a header in the seventh minute. And after Portugal equalized on Pepe's header in the 55th minute, it was Cavani again finishing a perfect Uruguay counter in the 62nd with a shot from just inside the penalty area that caught Portugal goalkeeper Rui Patricio slightly out of position and curled inside the far post.

"The truth is, it was really exciting," Cavani said. "There aren't words to describe this."

Cavani now has three goals at the World Cup, but limped off in the 70th minute with an apparent injury and had to be replaced. He was helped to the sideline with his arm around Ronaldo's back.

Uruguay, a two-time champion that reached the semifinals at the 2010 World Cup, will next face France on Friday in Nizhny Novgorod.

'No team can win alone'

Portugal had chances in the second half, including a frantic final few minutes of stoppage time with claims of a possible handball in the penalty area from a late corner kick. But there was no late video review to benefit Portugal as Ronaldo's fourth World Cup came to an uneventful end.

Like Messi, Ronaldo has never scored in a knockout round match at the World Cup.

Ronaldo had one clean shot the entire 90 minutes and it came in the opening moments of the match, directly into the arms of Uruguay goalkeeper Fernando Muslera. His shadows were Uruguay defenders Diego Godin and Jose Maria Gimenez, who know Ronaldo quite well from their clashes between Real Madrid and Atletico Madrid in the Spanish league.

Ronaldo was involved somewhat in Portugal's goal, even if he didn't come close to getting a touch on the cross. Ronaldo ran in front of Pepe and drew the attention of both Gimenez and Godin. Pepe came in behind and Uruguay finally surrendered its first goal of the tournament in the 55th minute.

Being level lasted only seven minutes.

"Up until yesterday I think people were saying, `Well, Uruguay won the group stage but the group was easy.' Well, I don't think Portugal is easy," Tabarez said.