Brazil eases into Round of 16 with win over Serbia

Brazil comfortably reached the World Cup last 16 after Paulinho and Thiago Silva scored in each half to give them a 2-0 win over Serbia who were eliminated on Wednesday.

Worried no more, Brazil is through at the World Cup.

Paulinho and Thiago Silva scored a goal each Wednesday to give the five-time champions a 2-0 victory over Serbia and first place in their group.

Brazil struggled in its opening two matches, first held to a 1-1 draw and then needing late goals to win the other. But they controlled this one, and it was a big relief to Tite.

"I'm apparently at peace," the Brazil coach said. "I'm still going to have a drink tonight for sure, a caipirinha. I'll allow myself." 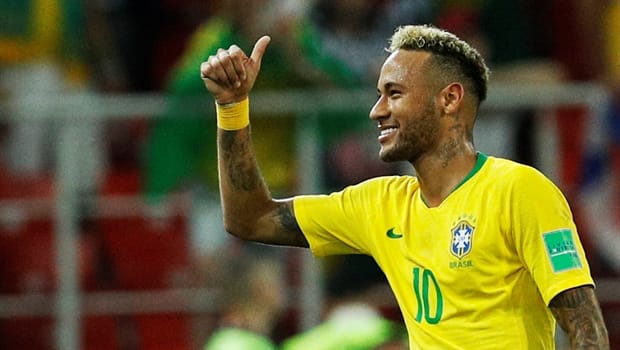 2 years agoVideo
1:21
Brazil claimed top spot in Group E with a win over Serbia, while Switzerland's draw versus Costa Rica was enough for the Swiss to advance. 1:21

Paulinho gave his team the lead when he met a lofted ball from Philippe Coutinho in the 36th minute. The defensive midfielder let the ball bounce in front of him near the penalty spot and kicked his right leg in the air to tap it over the goalkeeper's fingertips.

Silva later scored with a powerful header in the 68th from Neymar's corner.

Brazil finished first in Group E and will next face Mexico in the round of 16 on Monday in Samara. Serbia was eliminated, finishing third in the group behind Switzerland.

Both of Brazil's goals came when Serbia threatened to get back into the match.

The Serbs nearly scored in the 61st when Brazil goalkeeper Alisson pushed the ball into the path of forward Aleksandar Mitrovic, whose shot bounced off the keeper and was bound for goal before being cleared by Silva.

"In the second half we tried to play with more risk," Serbia coach Mladen Krstajic said. "We had chances to equalize, but we missed our chances and we were punished."

For most of the first half, Brazil couldn't break through Serbia's compact back line. But Paulinho, the player that Tite calls his "secret weapon," lived up to his name by scoring the first goal at Spartak Stadium.

Four years ago, Paulinho was part of the Brazil team that was humiliated at home in a 7-1 drubbing by Germany in the semifinals. He said he's learned so much since then, leaving Tottenham for a spell in China before joining Barcelona.

"A lot has changed in my life and my career," he said. "I have to be aware of the evolution I have undergone in these last four years. My leaving England for China was good for me, did me well. ... I recovered my self-confidence. I am here because I worked and I deserve it. In four years, I really developed a lot."

Brazil had an early setback when left back Marcelo was substituted in the 10th minute, limping off the field. Filipe Luis, who is playing at his first World Cup after failing to be selected in 2010 and 2014, was brought on to replace him.

The Brazilian soccer confederation later said Marcelo only had a back spasm and was fine.

This was a more assured performance from Brazil compared to its first two group matches. There was patient buildup play and the Brazilians sometimes rested in possession, exchanging short passes in their own half to slow down play.

Brazil did what it had to do to win, making sure it wasn't the second big team to exit the tournament after 2014 champion Germany was knocked out by South Korea.