Japan beat 10-man Colombia 2-1 in Group H on Tuesday to become the first Asian side to beat a South American one at the World Cup .

​Japan did what no other Asian team had ever done at a World Cup — beat a South American squad on the biggest stage in soccer. 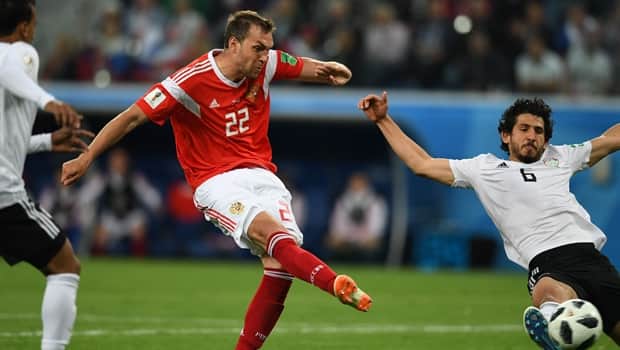 The 2-1 victory over Colombia on Tuesday was another surprising result in an unpredictable tournament.

A costly mistake by Colombia midfielder Carlos Sanchez in the opening minutes led to a red card and a penalty, helping Japan take an early lead. Coming in the third minute, it was the second fastest red card in World Cup history and the first of this year's tournament.

Yuya Osako won a bouncing ball to begin a sequence that led to the red card and the penalty. Sanchez blocked Shinji Kagawa's shot with his extended right arm and was ejected. Kagawa then converted from the spot.

Colombia, which played with 10 men for the rest of the match, scored late in the first half on Juan Quintero's rolling but accurate free kick, which sneaked inside the right post. Osako's gritty determination led to a 73rd-minute header from Keisuke Honda's corner kick that gave Japan three points in Group H.

"He played well in Germany this season," Honda said of the Werder Bremen forward. "He also couldn't score last World Cup and I knew he really wanted to score this game. I'm happy he scored."

Japan became the latest team to pull off an upset at the World Cup, joining Mexico, Switzerland and Iceland in earning unexpected results. The win was a surprise also because Japan changed coaches shortly before the tournament, and because Asian teams had failed to beat South American opposition in 17 previous World Cup meetings.

"Normally you prepare a match to play 11 players against 11 and to lose one player in the first three minutes — to lose such a crucial player — that's not an easy thing," Colombia coach Jose Pekerman said. "In the second half, Japan adapted its style and managed to score by playing better and taking advantage of their opportunities."

Sanchez did not speak to reporters after the match.

Japan will next face Senegal on Sunday in Yekaterinburg, while Colombia takes on Poland in Kazan on the same day.

"If we had actually won the World Cup, we would have had a parade on the main street of Saransk," Japan coach Akira Nishino said. "However, it is just one win, three points.

"We'll save our celebrations."

Colombia captain Radamel Falcao, who made his World Cup debut after a knee injury sidelined him in 2014, said his team will approach its remaining group games like "two finals."

"We only depend on what we do from now on," Falcao said. "We need to be strong, have character and show the power of our team."

Osako was instrumental in both goals and sprawled to block a close-range shot by Colombia midfielder James Rodriguez in the waning minutes.

"To score a goal for me in World Cup has been a dream," Osako said. "This is World Cup, it's a huge stage, and I think we started off very well."

The win provided joy to a country recovering from a deadly earthquake in Osaka a day earlier. Japanese princess Takamado attended the match.

Colombia defeated Japan 4-1 when the teams met in group play in Brazil four years ago, and the Japanese also began the game without Shinji Okazaki, a Leicester forward who has been trying to overcome a sore calf.

But it was apparent within minutes, when Sanchez got the red card, that the rematch would not go so smoothly for the Colombians.

Okazaki did get in the game, but not until the 85th minute.

Colombia started without Rodriguez, the leading scorer at the 2014 World Cup in Brazil. The Bayern Munich midfielder has an injured left calf and was on the bench at the start.

He came on in the 59th minute, but his best chances were thwarted by Japan's desperate defending.

World Cup games are known for starting on time, but not this one.

When the game was due to start, Falcao walked across to Japan's side of the field and spoke to referee Damir Skomina in a discussion that lasted beyond the official countdown to kickoff.

Moments later, Skomina ordered both teams to change sides, after which the match began.