Luis Suarez scored the winning goal in his 100th international appearance for Uruguay, knocking in a corner kick from Carlos Sanchez in the 23rd minute to give the two-time champions a 1-0 victory over the Saudi Arabia on Wednesday in Russia.

With a single goal, Luis Suarez settled the fate of four teams in the group stage of the World Cup.

The controversial striker, who was making his 100th appearance in his national team's light blue, scored Wednesday to give Uruguay a 1-0 victory over Saudi Arabia and a spot in the round of 16.

The result, though, had a domino effect in Group A. It also put host Russia into the next round while eliminating both Saudi Arabia and Egypt at the same time.

Suarez, who was kicked out of the last World Cup for biting an opponent during a match, knocked in a corner kick from Carlos Sanchez in the 23rd minute for his 52nd goal for his country in that century of matches. 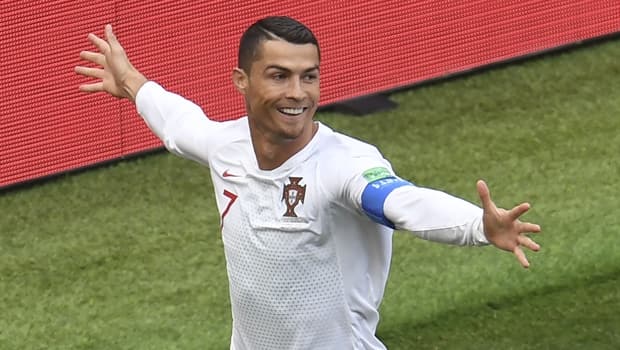 "We are more than proud because we've reached the knockout stage at three successive World Cups. It's a beautiful moment and we want to enjoy it," Suarez said. "We still haven't hit our stride so we need to tweak some things."

Uruguay and Russia both have six points from their opening two matches, putting them into the round of 16 with a match to go. They will face each other on Monday in Samara with first place in Group A on the line.

Suarez 'crucial player for us'

Besides scoring, Suarez led his team with a hard-working performance. He fell back to defend and raced forward alongside Edinson Cavani on the counterattack.

"I don't want to hand out empty praise but Suarez is a crucial player for us. And he has that enormous capacity to score goals," Uruguay coach Oscar Tabarez said. "He lives under enormous pressure, but he lives with it. He takes that pressure on."

The 71-year-old Tabarez is the oldest coach at the tournament and also led Uruguay to the World Cup semifinals in 2010.

"We do want to score more but there are other positives: no yellow cards, no injuries," Tabarez said. "We'll see who we get now [in the next round]. You don't see 10-0 games at the World Cup anymore. All the teams out there are good we respect all of them. That is a cardinal rule for us."

Cavani nearly made it 2-0 for Uruguay with a solo run through the opposing defence but his attempt was blocked by Saudi Arabia goalkeeper Mohammed Alowais.

Facing elimination, the Saudis fought hard for a goal with Hatan Bahmi getting several early chances. But they were outmatched by the Uruguayan defence and were under regular threat from Suarez and Cavani.

Saudi Arabia also had to play most of the match without trusted midfielder Taisser Aljassam, who limped off before halftime with an injury after lunging forward for a challenge.

Saudi Arabia coach Juan Antonio Pizzi said he was not ready to quit despite the early exit and 5-0 opening loss to Russia.

"That was a huge blow to us and I'm proud of how my players came back from it," Pizzi said. "My aim is to stay on and to see this team grow. Tonight we showed a lot of the things that we are capable of doing … Unfortunately we didn't create the opportunity we needed to equalize."

Pizzi denied reports that Saudi officials had vetoed four players from the starting lineup on Wednesday.

"All my players are available for all the matches," Pizzi said. "That's what I know."​