Serbia's Kolarov the difference-maker in win over Costa Rica

Aleksandar Kolarov's curling free kick in the 56th minute has helped Serbia to a 1-0 win over Costa Rica in its World Cup opener on Sunday in Russia.

With a curling free kick that decided the outcome of the match, Aleksandar Kolarov immediately drew some comparisons to Cristiano Ronaldo.

The Serbia captain's left-footed strike proved to be the difference in a 1-0 victory over Costa Rica on Sunday at the World Cup. It came two days after Ronaldo scored a similar goal to give Portugal a 3-3 draw with Spain.

"It was an amazing goal," Costa Rica defender Bryan Oviedo said of Kolarov's effort. "Maybe two out 10 balls will go in like that."

After Costa Rica midfielder David Guzman was handed a yellow card, Kolarov stepped up and curled his shot over the wall and into the net in the 56th minute. Keylor Navas, the Costa Rica goalkeeper who plays for Real Madrid, stretched but couldn't stop the swerving ball. 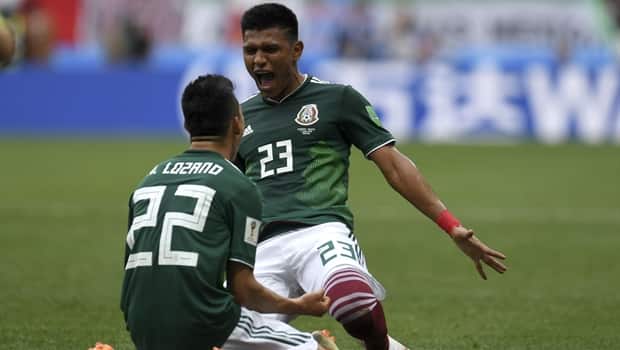 2 years ago
1:59
Mexico upset the defending champion Germans, Serbia shut out Costa Rica 1-0 and Switzerland held Brazil to a draw. 1:59

It was the third free kick goal so far at the World Cup: Russia midfielder Aleksandr Golovin had one in stoppage time in the 5-0 tournament opener against Saudi Arabia and Ronaldo capped his hat trick against Spain with the other.

"We knew that set pieces were our forte," said Kolarov, who now plays for Roma after a stint with Manchester City. "We practiced them on the training ground. I practiced set pieces, and this was enough for three points."

The victory gave the Serbians the early advantage in a tough Group E, which also includes five-time champion Brazil and Switzerland.

"It's especially important that we have three points in the bag," Kolarov said. "The match against Switzerland is going to be the most difficult one. Of course we want to win. Let's see what the game brings. There's not much time to celebrate. We will celebrate, but up to a point. Not excessively."

Squabble on the sidelines

The final moments of the match were marked by a squabble on the sidelines as Nemanja Matic got into a tussle with a Costa Rican assistant. Players from both teams rushed toward the scrum but it was quickly diffused. Video replay was also used late in the match to determine if Aleksandar Prijovic should be given a red card. He was given a yellow.

The Ticos were the surprise of the last World Cup, reaching the quarter-finals in Brazil before being ousted by the Netherlands on penalties. It was the furthest the small Central American nation had advanced in soccer's premier tournament.

But there was some uncertainty surrounding the team after a pair of friendly losses heading into the World Cup, including a 4-1 rout by Belgium a week ago.

"The Serbians did their homework very well," Costa Rica coach Oscar Ramirez said. "We tried to pressure them. And I think it was a tight match. We should have capitalized on our opportunities the same way they did."