Pickford saves the day as England beats Colombia on penalties

England beat Colombia 4-3 on penalties on Tuesday after Eric Dier scored the decisive spot kick to send them through to a World Cup quarter-final against Sweden.

England to face Sweden in quarter-finals on Saturday

The research paid off for Jordan Pickford.

When Carlos Bacca stepped up to take Colombia's fifth and final penalty, Pickford knew he was likely to shoot to the left.

The 24-year-old goalkeeper, in just his seventh England appearance, trusted his research and leaped. Research wasn't enough on its own — he also needed lightning reactions to shoot his left arm up to paw away Bacca's high shot.

The save gave England's Eric Dier a chance to win the shootout, and he converted. England moves on 4-3 on penalties after a 1-1 draw.

"It was a nervous one," Dier said. "I've never really been in a situation like that before."

England will next play Sweden in the quarter-finals on Saturday in Samara. It is the furthest England has progressed in any tournament since the David Beckham era, when a golden generation of players exited the 2002 and 2006 World Cups in the last eight.

England is advancing in Russia after defending champion Germany was eliminated early and Argentina, Portugal and Spain went home in the round of 16. 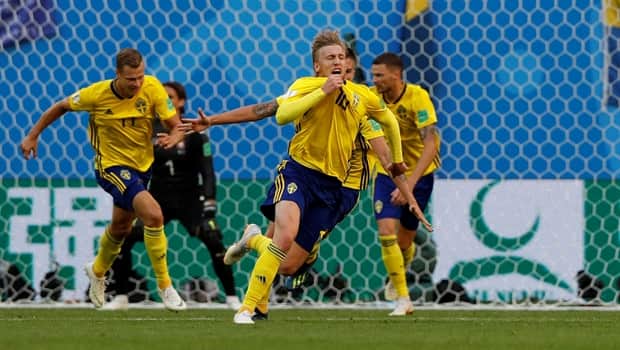 2 years ago
1:21
Emil Forsberg scored in the 66th minute to lead Sweden over Switzerland 1-0, while England ended their penalty misery with a 4-3 shootout victory over Columbia. 1:21

"I did a whole bunch of research," Pickford said, his confidence sky-high. "Falcao is the only one who didn't go his way. I don't care if I'm not the biggest keeper in the world. I have the power and agility."

Pickford was just two years old when England last won a penalty shootout, a few days older when the now-England coach Gareth Southgate missed the deciding penalty in a European Championship semifinal loss to Germany. That defeat at home was treated almost as a national trauma, as was the penalty loss to Argentina two years later.

Pickford only emerged as a leading Premier League keeper last year and made his debut for England in November. But he has rapidly become part of Gareth Southgate's new generation of English talent.

On an evening that ended with such frenetic energy, Pickford had little to do earlier.

Colombia was on the defensive for most of the first half and lacked bite in attack. England took the lead on a Harry Kane penalty in the 57th and Colombia came charging back. In stoppage time Mateus Uribe fired a stinging shot from long range and Pickford leaped to keep it out with one outstretched hand, sending it wide of the goal and cannoning into the advertising boards.

Pickford could do nothing about the subsequent corner. Colombia defender Yerry Mina rose above Harry Maguire and headed the ball off the turf and in despite Kieran Trippier's headed clearance attempt. Extra time and penalties loomed, and fans felt the weight of those 22 years without a shootout win.

"To get knocked down at the end like we did at the end, it's difficult to come back from that," Dier said. "But we were ready for that. We were calm. We stuck to our plan."

It wasn't just England's miserable record which seemed to stack the odds against the team. Its penalty takers lacked experience of major tournaments — though none of the penalty takers had been involved in any of those shootout losses — and had to stare down a stand packed with raucous Colombian fans.

While Colombia's David Ospina stood taciturn, staring down England's penalty takers, Pickford was a ball of energy. He jumped and jiggled on the line.

With England 3-2 down and facing elimination, Pickford leaped to touch the crossbar as Mateus Uribe stepped up, and the Colombian blasted the ball into the bar.

Trippier made it 3-3, and Pickford was up again to face Bacca. After saving from the AC Milan forward, he squatted to the side of the penalty area, frog-like in his green uniform. Dier hit the winning penalty low and left for England and Pickford's teammates charged toward him to celebrate in a group hug.

The joy of victory was built on self-belief, Pickford said.

"Our mindset and mentality, we never stopped," he said. "We knew we had this game even if it went to penalties."