Lionel Messi and his Argentina teammates are on the verge of World Cup elimination. Croatia is moving on. Argentina was handily beaten by Croatia 3-0, a loss that makes advancement very difficult with only one group match remaining. It was Argentina's worst loss in group play in 60 years.​

Lionel Messi and company need a win and help to advance; Croatia moves on to Round of 16

Lionel Messi's frustrating international career may be coming to an early and anti-climactic finish after Argentina's worst loss in World Cup group play in 60 years.

With Diego Maradona watching from the stands, the 2014 runners-up were routed by Croatia 3-0 Thursday. The Croats are moving on to the round of 16.

Messi didn't get a single shot off in a defeat that pushed Argentina to the brink of elimination. Messi, who turns 31 on Sunday, has never won a major title with Argentina's senior national team despite of decade of championships with Barcelona and five player of the year awards. 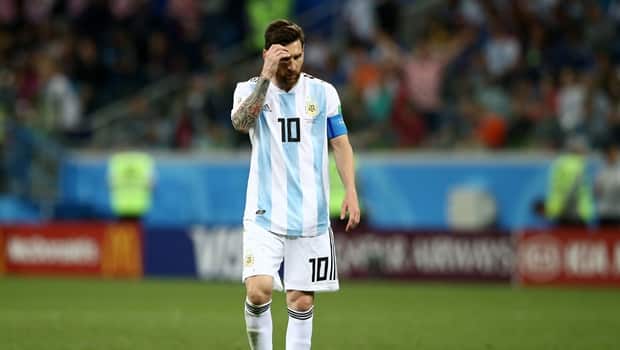 3 years agoVideo
2:26
Croatia and France advance to the Round of 16, while Lionel Messi and Argentina have been pushed to the brink of elimination. 2:26

Messi also missed a penalty kick in his team's opening 1-1 draw against Iceland.

Argentina, hurt by the poor play of goalkeeper Willy Caballero on Thursday, had not lost by such a large margin in the first round since a 6-1 defeat to Czechoslovakia in 1958. Caballero gained the starting role because of an injury to No. 1 keeper Sergio Romero in the run-up to the tournament.

"We have to swallow the poison," Argentina midfielder Javier Mascherano said. "The game says it all."

Argentina needs a win and help

Argentina, which has not missed making the second round since 2002, has not been eliminated. But the two-time champions need to win their next match against Nigeria on Tuesday, as well as get help from other matches.

Thursday's humiliating loss came in humiliating fashion for one of soccer's most storied nations.

Caballero mangled a clearance and kicked the ball toward Croatia defender Ante Rebic, who one-timed it into the net in the 53rd minute.

Caballero buried his face in his hands while a giant television screen showed Maradona doing the same.

"After they scored on us, we were emotionally broken," Argentina coach Jorge Sampaoli said. "I had a lot of hope. I am extremely hurt by this defeat, but I probably didn't understand the match the way I should have."

And it got worse as Argentina crumbled, frustrated by the Croatian defence. Modric scored with a hooking shot in the 80th and Ivan Rakitic added the third in stoppage time.

Croatia frustrated Argentina throughout the match and never gave Messi space to operate.

"Argentina wasn't confused. We were excellent," Croatia coach Zlatko Dalic said. "We beat a great Argentina with the best player in the world playing, Messi."

Croatia, which reached the 1998 World Cup semifinals but has not advanced past the group stage since then, will face Iceland on Tuesday in Rostov-on-Don.

"Let's keep our feet firmly on the ground and prepare for the next matches," said Modric, the man of the match. "We should be focused on what awaits. Every next game is going to be more difficult, but our main objective has been reached. It looks easy, but it was not that easy."

Argentina won the World Cup in 1978 and 1986 — the last with Maradona as the star player — but has not won any major title in 25 years. The Argentines also lost in the last two Copa America finals.

Croatia has advanced with six points from two matches in Group D, while Argentina has only one point and is facing elimination.

Iceland also has one point, and Nigeria has zero. Nigeria and Iceland play on Friday.

Croatia stymied Messi for 90 minutes, not allowing even one shot.

The Croats played with five midfielders and seemed to close down any possible space.

Before the match, Dalic said this was going to be Croatia's "easiest game." He clarified that by saying it would not be an "easy opponent" but it would be a "pressure-free match."

Sampaoli didn't want to choose when asked if Cristiano Ronaldo was the best player in the world.

"I think Cristiano is a great player. You can look at all he has achieved as a player for his club and his country," Sampaoli said. "Right now we shouldn't compare these two players ... Leo is limited because the team doesn't gel ideally as it should. As coaches we need to realize these things and I am the one who needs to accept that."