Canadian soccer fans are still buzzing about Alphonso Davies’ Champions League victory with Bayern Munich last weekend, but there could be more to cheer about in the week ahead as the women's side takes centre stage.

Canadian soccer fans are still buzzing about Alphonso Davies' Champions League victory with Bayern Munich last weekend, but there could be more to cheer about in the week ahead as the women's side takes centre stage.

It's guaranteed that at least one — if not two — Canadian women will have a chance at the title this Sunday at Anoeta Stadium in San Sebastián, Spain.

If their most recent matches are any indication, the game should be an exciting one. Just over two weeks ago, Lyon edged its rival in penalties to take the Coupe de France Feminine. Last fall, OL won on spot kicks in the inaugural Trophée des Championnes (competed between the winners of the Coupe de France and the league champions). In league play, Lyon squeaked by PSG 1-0. 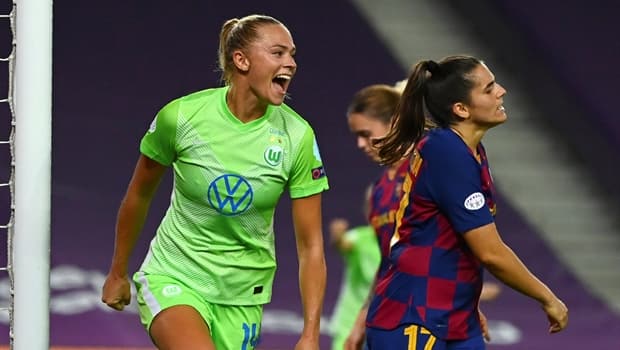 2 months ago
1:22
Wolfsburg will compete in their fifth UEFA Women's Champions League final after a 1-0 win over Barcelona. 1:22

Lyon has won 32 of 44 all-time meetings, with just five PSG wins and seven draws. PSG's last win over Lyon came in the French Cup in 2018.

The winner of the team's next match will play two-time Champions League winners Wolfsburg in Sunday's final. The German outfit edged Barcelona 1-0 in the first semifinal.

On Wolfsburg's roster is one of the best footballers in the world: Danish striker Pernille Harder. Other key players include team captain Alexandra Popp of Germany, Polish sensation Ewa Pajor and Norweigan midfielder Ingrid Syrstad Engen.

The club's president and owner Jean-Michel Aulas not only has deep pockets, but also the belief that women should be treated on par with men. They have the same access to training and playing facilities, medical teams and travel. Their salaries are generally much higher than their counterparts in Ligue 1 and other international leagues.

The list of stars goes on — even without former Ballon d'Or winner Ada Hegerberg of Norway, out with a knee injury, the team is rock solid.

And if you're talking about rock solid, Buchanan's name comes to mind. The 24-year-old from Brampton, Ont., is steady and fearless at the back, making punishing tackles and often marking the opposition's top players.

She's been a mainstay on the Canadian national team since she was 17, playing in two Women's World Cups and winning bronze at the 2016 Rio Olympics. Since signing with Lyon in 2017, Buchanan's won three Champions League crowns.

OL's French rival Paris Saint-Germain may not have a trunk full of titles like Lyon, but it's hungry for an upset.

Reigning Canadian player of the year Lawrence features prominently for PSG at fullback, playing both the right and left side.

She's known as a box-to-box player, always keen to join the attack, set up her teammates with bending crosses and even score the odd goal. Lawrence also possesses the pace to recover in transition.

With 91 appearances, two World Cups and an Olympics already under her belt, the 25-year-old Lawrence will be a key player on the road to Tokyo next summer.

The native of Chilliwack, B.C., has four goals in four Champions League matches this season.

After watching boyfriend Davies capture one of soccer's greatest prizes, she'll aim to add her own Champions League title to her trophy case.