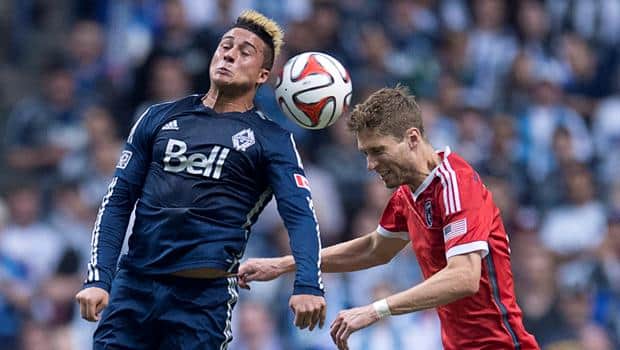 7 years ago
0:57
Whitecaps use early outburst to stop Earthquakes. 0:57

Carl Robinson got the start he wanted Saturday, but he was still left almost speechless.

The delighted Vancouver Whitecaps coach was "lost for words" after his club scored three goals in the first 20 minutes en route to a 3-2 win over the San Jose Earthquakes.

The Whitecaps (3-2-4) earned their first win in five games while the Earthquakes fell to 1-3-3. The game commemorated the first ever contest between Vancouver and San Jose, which was played May 5, 1974 when both teams were part of the original North American Soccer League.

"I challenged them at the start of the game because it was a fantastic occasion today for the club and the tradition of the club," said Robinson. "I didn't want them to start slow where we have been in a few recent games."

Despite the close score, the Whitecaps prevailed relatively easily after being forced to stage late comebacks in dramatic draws with Real Salt Lake and Los Angeles in their previous two games.

Pedro Morales scored two goals a minute apart, with the first coming on a penalty-kick in the 19th minute and the second resulting from a shot from about 20 yards out in the 20th minute.

"We got off to a great start, the team played very well, it was very exciting for the fan and we created a lot of (scoring) opportunities," said Morales.

Kekuta Manneh also scored a goal and furnished an assist for Vancouver.

"It was a big occasion for the club," said Manneh. "We all talked about it before the game and we had to come out and win the game. We were not that worried about the occasion, but we've got to do our job, and we did that, so it was great

"We learned from our previous games."

Chris Wondolowski, on a penalty-kick in the 45th minute and a lucky bounce in second-half stoppage time, scored both San Jose goals.

"We did not come out with a good mindset," said Wondolowski. "Going down 3-0 against a very quality team, it's way too big a hole to climb out of. We didn't do things right."

Many fans wore 1970s-era clothing, including colourful bell-bottom pants that would make Norwegian curler Thomas Ulsrud's crew envious, and donned long-haired wigs, fake handlebar moustaches and sunglasses. The attire was part of the Whitecaps' tribute to the days of disco music.

Whitecaps captain Jay DeMerit started after being kept home from the previous weekend's road game against San Jose for rest purposes. Meanwhile, Vancouver striker Kenny Miller began the game on the bench before coming on in the second half, as Robinson used a 4-2-3-1 alignment with Darren Mattocks deployed as the lone forward.

As a result, Manneh, who has been used mostly as a substitute, started in midfield in a move that paid early dividends. Manneh gave the Whitecaps a 1-0 lead in the 10th minute as he fired a first shot off the near post and then put his own rebound in off the far post.

Crediting Morales' passing prowess, Robinson said he did not have to say too much to his players about starting well after he had chewed them out at half-time in the previous game.

"Obviously, after the reaction at Salt Lake at half-time, they got back in character," he said.

Manneh's goal came after DeMerit checked the ball away from charging San Jose forward Yannick Djalo and sent the ball up the left flank. With Djalo injured in the process and kneeling on the turf, the Whitecaps were able to capitalize on an odd-man situation.

"As soon a Yannick went down they scored the first goal. It was just 10 minutes where we couldn't cope with them," said Earthquakes coach Mark Watson.

Morales put the Whitecaps ahead 2-0 on a penalty-kick after Mattocks was deemed to have been taken down while deking with the ball in the San Jose box. With the sellout crowd of 21,000 standing in anticipation, Morales rolled a shot into the left corner after San Jose goalkeeper Jon Busch elected to go to his right.

A minute later, Morales notched his second goal as he put a shot into the same corner from just outside the top of the San Jose box. After scoring the goal, Morales unwittingly doffed his jersey, waved it over his head, and excitedly ran bare-chested to the bench — only to get an automatic yellow card for excessive celebration.

Wondolowski has success against Whitecaps

Vancouver lost a shining Mattocks in the 30th minute after he pulled up with what Robinson described as a hamstring injury. Mattocks was replaced by second-year pro Erik Hurtado, but the change had little effect as Vancouver finished with 17 shots, including 13 in the first half, including nine on target.

San Jose put just four of seven total shots on Vancouver goalkeeper David Ousted, who was still sharp when necessary as the Caps continued mastery over a traditional powerhouse.

The Earthquakes have yet to win in Vancouver in nine all-time MLS meetings with the Whitecaps. Overall, Vancouver holds a 4-1-4 edge in the series.

Wondolowski, who now has nine career goals against Vancouver, was less than satisfied with the comeback attempt. He admitted his second goal, which redirected off DeMerit, was fortuitous after he did not get much behind the shot.

"[The late rally] was too little, too late," said Wondolowski. "We can't be doing that. a This loss is unacceptable."

Before the game, Whitecaps president Bobby Lenarduzzi became the first inductee into the club's new ring of honour.

Los Angeles Lakers star Steve Nash, a Whitecaps minority owner, presented Lenarduzzi with a ring in conjunction with the honour.