Croatia could face punishment by UEFA after a swastika pattern could be seen on the pitch for its European Championship qualifying match against Italy.

Crotia could face punishment by UEFA 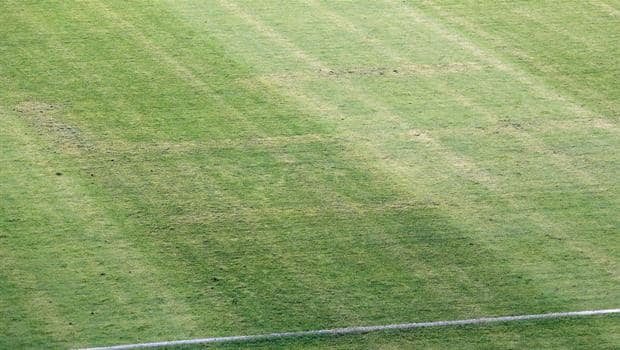 5 years agoVideo
1:07
The UEFA European Championship qualifier between Croatia and Italy was marred by a swastika , which appeared to be cut into the pitch. 1:07

Croatia could face punishment by UEFA after a swastika pattern could be seen on the pitch during its European Championship qualifying match against Italy, which ended 1-1 on Friday.

It was unclear whether the symbol was mowed into the pitch or painted on the grass, but it was clearly marked in the middle of the half Italy was attacking in the first period.

Grounds crew attempted to cover it up during halftime, but to little avail.

The match was being played behind closed doors as punishment for racist chanting and other misconduct by Croatia fans during last month's qualifier against Norway.

The November qualifier at San Siro between Italy and Croatia — which also ended in a 1-1 draw — was temporarily halted by crowd trouble.

"It's one of our problems and we are working to fix it," said David Suker, the president of the Croatian football association. "Unfortunately something happened tonight too, but we would prefer not to talk about it now, we'll talk about it from tomorrow."

A spokesperson for the federation said they had indicated the matter to UEFA, adding "we apologize to Italy and to everyone."

In a friendly with Italy in Livorno in 2006, around 200 Croatia fans formed a human swastika in the stands, positioning themselves to depict the symbol commonly associated with Nazi Germany. They also gave Nazi salutes.