Vancouver Whitecaps coach Marc Dos Santos thinks anxiety got the best of his squad early in its season opener on Saturday night.

"The beginning was disappointing," said Dos Santos after the Whitecaps dropped a 3-1 decision to Sporting Kansas City before a crowd of 22,120 at B.C. Place. "A lot of anxiety on our side.

"We really wanted to do well we were ready to play the game. And for some reason, we just didn't start the way we wanted to." 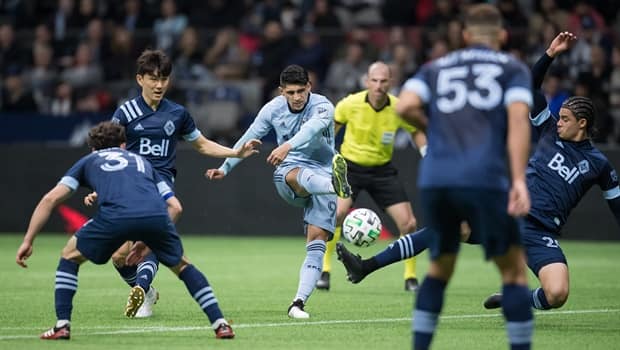 Pulido signed with Kansas City in December having spent the first 12 seasons of his career in Mexico and Greece. Kinda was loaned to Sporting KC in January by Israeli Premier League club Beitar Jerusalem.

Jake Nerwinski replied for Vancouver, which saw its record in home openers drop to 5-4-1 in the team's 10-year history in MLS.

"I think our first 15 minutes, we didn't do a lot of the things that we were doing in pre-season," said Nerwinski, who admitted he was "upset" by his team's last-place finish in the Western Conference in 2019.

"We were a little too excited. I think we calmed down a bit, to end the first half. We were pretty strong in the second half and I think we just we weren't able to get in a groove early.

"Kansas City did. Credit to them — they stopped our game plan, they kept the ball and they didn't allow us to really pressure them."

Vancouver opened its season with 13 new players on its roster and with original Whitecap Russell Teibert wearing the captain's armband.

Marquee striker Lucas Cavallini was acquired by the Whitecaps in the off-season to help ignite their offence. After scoring four goals in pre-season, Cavallini was held off the scoresheet in his regular-season debut but showed fans his offensive instinct during the match.

He rang the ball off the goalpost late in the first half and had a shot smothered from in close by opposing goalkeeper Tim Melia in the 88th minute.

"Lucas put himself in a situation to get a goal," said Dos Santos. "Today, it didn't happen, but it's going to come for sure."

"Just one of those days where the ball just doesn't want to get in the back of the net, you know?" mused Cavallini after the game.

"We had a really good pre-season. This is not the Vancouver Whitecaps that was playing those exhibition games in Portland. We can do way better than this."

Sporting Kansas City dominated possession in the early going. In the 17th minute, Sporting KC's new striker Pulido opened the scoring, heading the ball past the outstretched right hand of Crepeau for his first MLS goal after Ilie Sanchez earned a free kick from a dangerous spot just outside the box.

The Whitecaps tied the score 1-1 in the 28th minute. Another newcomer, David Milinkovic, ran the ball along the goal line before feeding it to the sliding defender Nerwinski, who tapped it into the open net from close range for his first career goal at B.C. Place.

"I think that the guys showed before this game that they were capable of doing what we wanted," said Dos Santos. "Today, especially in the first 25 minutes, we weren't able to apply what we worked on.

"It was kind of surprising. We felt it on the field, a little bit of anxiety. Some guys nervous and having choices of passes that were risky or too many touches, trying to do everything perfect. So that was difficult tonight."

In the 39th minute, Sporting KC re-took the lead when their new midfielder, Kinda, converted a pass from Luis Martins with a curling kick into the top corner of the net.

There was no scoring in the second half until Hurtado beat Crepeau in dying seconds of added time.

The Whitecaps' next game will be on the road, against the L.A. Galaxy. They'll return to B.C. Place on Mar. 14 to host the Colorado Rapids.