Toronto FC goes into the opening leg of the Eastern Conference final without the services of star players Jozy Altidore and Sebastian Giovinco. But with seven goals in just 22 games, Tosaint Ricketts has shown he's up to the task of filling their role.

Toronto FC was just founded when Tosaint Ricketts began his collegiate soccer career in 2005 at the University of Wisconsin-Green Bay.

He's been a fan since its inception — following them across the pond during his playing days in Europe — and the thought of continuing his career at home was always on the back of Ricketts' mind.

After seven years of ups and downs — including stops in Finland, Norway, Romania, Turkey, and Israel — the 30-year-old decided it was time to return.

"I ran into a few undesirable situations overseas in terms of salary — not being paid on time — basically just unstable environments. I just had enough and wanted to change things up in my career," Ricketts told CBC Sports.

For the most part, he's been a substitute — filling in for the occasional start due to injuries or when players are away for international duty.

This Tuesday with be one of those situations as TFC opens up the Eastern Conference final on the road against Columbus Crew SC (8 p.m., ET) without star forwards Jozy Altidore (violent conduct) and Sebastian Giovinco (yellow cards).

The duo combined for 31 of Toronto's league-leading 74 regular-season goals but they're far from the only goal-scoring threats.

Ricketts has shown a knack for finding the back of the net whenever he steps on the pitch scoring seven times in 22 games played. 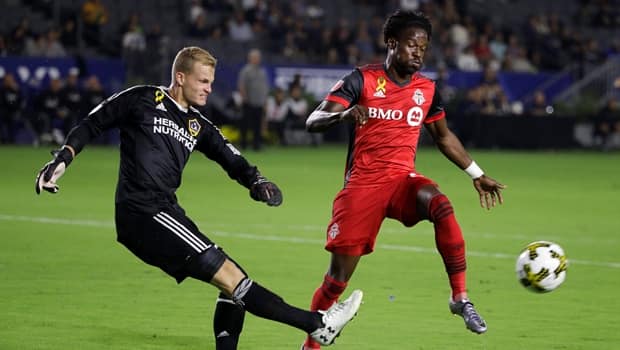 Four of those goals came in three consecutive starts without the services of Altidore and Giovinco.

"We have Tosaint who's been excellent for us over the course of the year. [I have] no issue putting Tosaint on the field," said TFC head coach Greg Vanney after the second leg against the New York Red Bulls.

"He gives us presence, size, speed, a goal-scoring threat. The question is who do we partner up with him if we decide to go to two [strikers up front] or how do we create a structure around Tosaint?"

Who plays alongside Ricketts?

In the same trio of games, Ricketts has partnered up with a different player but is confident that whoever it is, they'll find a way to deliver him the ball.

One of those players is Victor Vazquez, whose 16 regular-season assists ranked second in the MLS.

The Spanish midfielder played alongside Lionel Messi, Andrés Iniesta, and Cesc Fàbregas at FC Barcelona's famed La Masia youth academy and it's safe to say he learned a thing or two from them.

"His passing ability is unbelievable. I say he comes from the Harvard school of soccer — his soccer IQ is extremely high, maybe higher than any player I've ever played with," Ricketts said.

"He's so valuable to the team and his vision on and off the ball, that's what pushed us to the next level. I know if I make a good run [towards goal], Victor will pick it out 100 per cent. I just gotta worry about what I do."

You can tell just by listening to Ricketts how razor sharp his focus is. His job is to score goals but for that to happen he prepares himself following a methodical routine.

"In the first half, I watch the tendencies of defenders, what spaces and weaknesses I can exploit and come second half I'm just waiting for any amount of time possible — if it's two, five, 15 minutes — to come on and provide that spark. It's just the mentality that comes along with the role I have," Ricketts said.

In a span of nine minutes he did just that, scoring twice against the Crew in May to steal a win for the Reds.

"I saw spaces in the box when the balls got wide. When Raheem [Edwards] came on, I know that he likes to get the balls in the box — so I want to attack those spaces and get on the end of those crosses," Ricketts said.

Ricketts isn't shying away from the added responsibility that comes with starting. He's been in a similar role on the Canadian national team for years and knows what it's like to have the weight of your teammates and a nation on your shoulders.

It was at those camps that Ricketts got to know ex-TFC star Dwayne De Rosario.

De Rosario had a killer instinct and if there's anything Ricketts has learned from him, it's to live in the moment rather than be scared of it.

"He pushed me to become a better player, stretch out of my comfort zone, and become the best player I can be," Ricketts said.