Matteo Mancosu and Jozy Altidore traded goals in the first half as the Montreal Impact and Toronto FC played to a 1-1 draw Wednesday night in the Canadian championship final at Saputo Stadium. 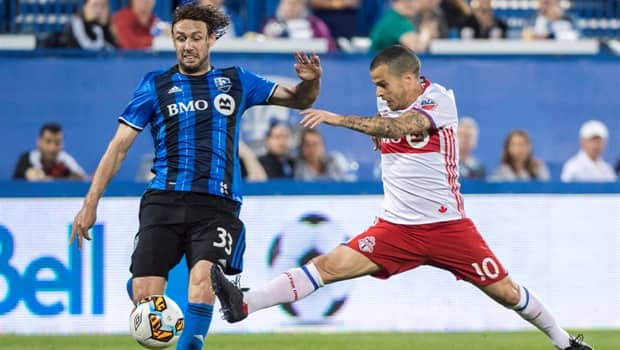 ​​It was a 1-1 draw, but Toronto FC emerged with the advantage after an intense, if somewhat sloppy, encounter with the Montreal Impact.

Matteo Mancosu and Jozy Altidore traded goals in the first half on Wednesday night in the opening leg of the Canadian championship final at Saputo Stadium.

But with an all-important away goal in their pocket, TFC will have the advantage going into the second leg of the two-game, total-goals series next Tuesday at BMO Field in Toronto.

"Theoretically it's a good result," said Toronto coach Greg Vanney. "A 1-1 draw with a road goal. We'll take it."

Their first matchup since TFC beat Montreal in overtime of a wild MLS Eastern Conference final in November had more big moments as Impact star Ignacio Piatti missed from the penalty spot in the 54th minute and both sides wasted glittering chances in and end-to-end final 20 minutes.

But what set the less than sellout crowd of 14,329 to booing was Altidore's tying goal in the 30th minute, which came with Montreal defender Daniel Lovitz on the ground in pain after cutting open his knee in a pileup at the edge of the 18-yard box.

Toronto didn't play the ball out of bounds to stop play as teams often do when a player on either team is injured, but instead Raheem Edwards slipped the ball to Altidore in the space Lovitz should have been guarding for a lowshot that goalie Max Crepeau let slide under his body and into the goal.

Referee Silviu Petrescu could also have whistled the play dead, but chose not to.

"I'm not even sure if our guys knew there was a player down," said Vanney. "It was pretty far away from them.

"In the grand scheme of things we're not obligated to play the ball out of bounds. The referee can stop the play if he wants to, but honestly I'm not sure the guys even knew he was still on the ground."

"I would understand if he was out of the play higher up the field, but he's defending in the middle of the box," said Biello. "And they ended up scoring a goal.

"In the end, that's the choice they made and if it happens our way we're going to know how to react too."

Lovitz, who joined Montreal from TFC this season, was stretchered off the field with a gash Biello described as "disgusting" and was replaced by Hassoun Camara. Biello said it does not appear to be a long-term injury, which was a relief to a team that lost starting left back Ambroise Oyongo for the season with a knee injury last week.

Montreal got former women's national team member Josee Belanger, the guest bell-ringer for the night, clanging the goal bell in the east grandstand in the 19th minute.

Laurent Ciman tried a shot from distance that Clint Irwin pushed over the bar. Blerim Dzemaili played the ensuing corner kick out far to Marco Donadel, whose low shot was juggled by Clint Irwin with Mancosu on the doorstep to head the ball in.

Both teams dressed many of their regular starters, and when second half substitutions were made, both went with attacking players — Sebastian Giovinco and Victor Vazquez for Toronto and Ballou Tabla and Andes Romero for Montreal. But neither could get the go-ahead goal.

"Both sides made a lot of mistakes and we missed some opportunities," said Impact defender Chris Duvall, who had no issue with TFC not playing the ball out when Lovitz was injured. "I wish they would have but if I was them I probably wouldn't have either.

If Toronto FC wins, they also clinch a berth in next year's CONCACAF Champions League, but if Montreal wins it must play TFC again in August in a one-game playoff. Toronto won the Cup last year but was deprived of Champions League play because the tournament changed format.