Toronto (3-0-1), which came into the game as the only MLS team with a perfect record, will rue the dropped points. The home side dominated the first half but showed cracks in the second.

Jozy Altidore, who had given Toronto a 1-0 lead in the first half, set up the tying goal. Positioned on the flank near the Chicago penalty box, the burly striker twisted and turned Jeremiah Gutjahr before delivering a perfect cross for Osorio to head in. 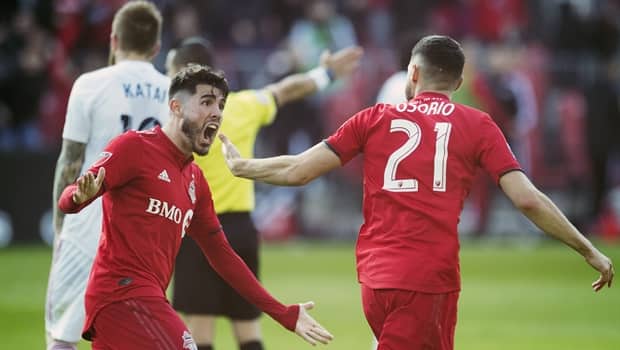 Spanish playmaker Alejandro Pozuelo, who dazzled in his MLS debut last week with two eye-popping goals and an assist, set up the 31st-minute Altidore goal with a perfect cross that stranded three defenders and goalkeeper David Ousted before the American headed it in at the far post for his third of the season.

Chicago drew even in first-half stoppage time after Gutjahr's long ball found Sapong, who held off Chris Mavinga and then chipped goalkeeper Alex Bono for a goal against the run of play.

A Toronto giveaway set the scene for Chicago's go-ahead goal in the 62nd minute. Richie Laryea lost the ball in midfield and Aleksandar Katai raced through the area the Toronto fullback was supposed to be. With no one closing him down, he headed toward the penalty box and sent in a cross that Nikolic tapped in as Toronto defenders watched.

Laryea, a 24-year-old from Toronto, made his first TFC start in place of injured Brazilian fullback Auro. And the local boy, in his fourth career MLS start, did not look out of place in the first half.

Toronto had the bulk of early possession, searching for ways to penetrate a dense defence. Content to hit off the counter-attack, Chicago lay back with a line of five defenders when Toronto had the ball.

The Fire had no problems being physical when needed. Chicago had four players booked to two for Toronto over 90 minutes.

The home side had 75.6 per cent possession in the first half. At times it felt like only the Chicago half of the field was being used.

Referee Armando Villarreal awarded Toronto a penalty in the 21st minute when Sapong bundled Laryea to the ground in the penalty box. Laryea was ruled offside on the play, however, so the penalty was negated.

Katai and Laryea were booked in the 37th minute after a melee that drew in several players.

Ousted made a fine save to deny Altidore off a Nick DeLeon cross early in the second half.

But Toronto seemed less secure in the early part of the second half, with mistakes giving Chicago chances to attack.

Argentine international midfielder Nicolas Gaitan, who made his Chicago debut off the bench last week, entered the game in the 69th minute.

Chicago made one change from the team that beat the New York Red Bulls 1-0 last time out, with 20-year-old U.S. international midfielder Djordje Mihailovic coming in for Polish international Przemyslaw Frankowski (groin).