TFC's Alex Bono unfazed by challenges on and off the pitch

Alex Bono's path to becoming Toronto FC's starting goalkeeper didn't come easy. But when the opportunity arrived, he was more than prepared — just as he's been his entire life.

Reds' starting goalkeeper remains ready for anything that presents itself

Preparation has been an underlying theme throughout the life of Toronto FC's starting goalkeeper Alex Bono.

The 23-year-old was equally ready on the pitch when former No.1 Clint Irwin was injured in the home opener. He's also working off the pitch towards the completion of a major in broadcast and digital journalism.

Bono's been up to the task thus far in his first MLS post-season, an indication that he'll be unfazed by whatever life throws at him.

Alex Bono averaging a game saving stop per game during these playoffs. Their MVP so far no doubt. <a href="https://t.co/RaLoMeu3EL">pic.twitter.com/RaLoMeu3EL</a>

"I think it's an overall characteristic of a goalkeeper. If you look at a lot of goalkeepers, the way they've gotten their starts is because there's an injury or a red card and they're forced into the game," says Bono ahead of Wednesday night's (7:30 p.m. ET) Eastern Conference final against the Columbus Crew at BMO Field.

"You have to be anticipating that something could happen at any moment and when that does, you have to be ready and aware that this is the opportunity to step up and make your name for yourself." 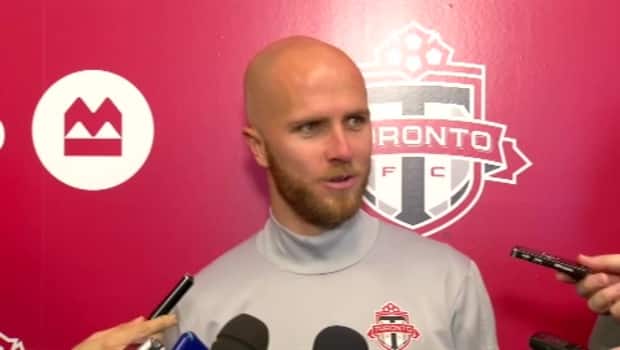 "We're very excited at this time of the year, all you want to do is play".

3 years agoVideo
0:36
TFC's Michael Bradley is anxious to get back on the field as the Reds prepare to host the Columbus Crew. 0:36

Bono has made the most of it securing the starting job even after Irwin was healthy.

The Baldswinville, N.Y, native posted a 19-4-6 record in 29 games played (28 starts) during the regular season — including 10 clean sheets — en route to finishing fourth in the MLS goalkeeper of the year voting.

The six-foot-three goalkeeper's solid play hasn't been lost on his teammates.

Defender Drew Moor has been impressed by Bono's maturity and ability to relay information with his backline.

In 10-plus years of MLS play, the 2015 all-star says he communicates as much as any goalkeeper he's ever played with — allowing the defence to remain organized and not so susceptible to counter attacks.

"Since he's stepped in, he grew leaps and bounds. He comes in every day and puts in a good work shift. He's hungry to continue to improve. He's confident but not overconfident — he knows the line there," Moor says.

There was a point when TFC's selection of Bono with the sixth overall pick in the 2015 draft was questioned.

His standout career at Syracuse University included Atlantic Coast Conference defensive player of the year honours and a finalist nod for the Mac Hermann Trophy as the NCAA's top collegiate player.

But Bono failed to make TFC's first team that season and was assigned to TFC II (its minor league affiliate) of the United Soccer League (USL).

The year after, Bono was up-and-down between the two clubs, backing up Irwin whenever he was with the big club.

All of a sudden, Bono went from being "the guy" to not even dressing on game day and the transition hit him hard as he went just 2-8 in his rookie minor-league season.

"It's tough when you're not playing up to your expectations. I didn't help myself. I thought I was poor for most of that season as I was making the jump to the professional lifestyle. There were some points where confidence was very low [and I was] discouraged," Bono recalls.

"But being in your first season, you have to stick with it [and] you learn to deal with those things and move past them."

Bono looked at his time in the USL as an opportunity to learn and get better. During his tenure, Bono saw too many TFC academy players take their spots for granted.

Bono felt he was always one performance away from being cut or earning his big break.

"That's a difficult reality to face for some kids but it's about persevering at that point. It's about taking your little battles in training because you never know when you're going to be on the field next," Bono says.

When Bono made his way onto the first team last season, he continued to do just that.

"You have to treat those like they're a Saturday night at BMO Field. You have to win them and be pissed off if you lose. When you're playing against the starters, that's the closest thing you're going to get to live action before you're actually thrust into it," Bono says.

"I took those opportunities and said, 'Listen, I'm going to shut out Jozy [Altidore] and Seba [Giovinco] today. My team is going to win this game.' You feel a sense of pride if it does happen because those are your games."

Bono's dedication to his craft is something he took from legendary Juventus goalkeeper Gianluigi Buffon — one of his major influences.

"He lives for playing soccer, playing for the Italian national team, [and] for being the last line of defence. It embodies the ultimate passion when it comes to his nationalism [and] professionalism," Bono says.

Bono's got a promising future ahead. He's on the radar of the U.S. national team and one day hopes to have his own opinionated sports talk show.

But for now, he's got his eyes set on an MLS Cup and there's no question that Bono has the drive needed.

"When you have a knack for something, follow it and [if] you find passion in that, then I think it's something you should chase no matter what profession that may be," Bono says.