401 Derby: Ponzuelo, Altidore give TFC much needed win over Impact

Alejandro Pozuelo and Jozy Altidore scored to give Toronto FC a 2-0 victory over the rival the Montreal Impact on Saturday night at Saputo Stadium.

Reinforcements couldn't have returned at a better time for Toronto FC.

Alejandro Pozuelo and Jozy Altidore scored to give Toronto FC a 2-0 victory over the rival the Montreal Impact on Saturday night at Saputo Stadium. Altidore, along with Michael Bradley, made their return to the lineup after being away with the United States men's national team for the Gold Cup.

"This game was big," Altidore said. "All week we talked about the importance of this game, being a derby match. It's important, trying to get back into the mix into the table. This is one of those games that spur on a season. Hopefully it's the start of some good things and I thought the effort was fantastic." 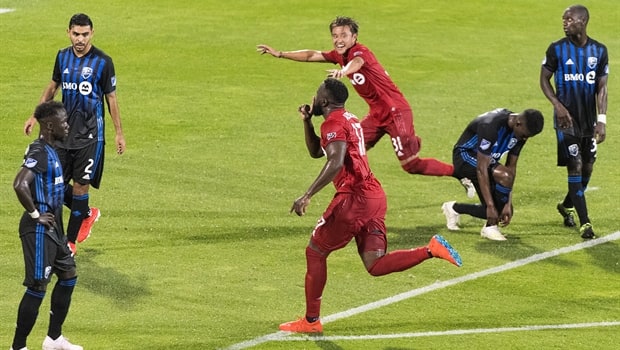 2 years agoVideo
1:25
Alejandro Pozuelo and Jozy Altidore scored as Toronto FC knocked off the Montreal Impact 2-0 in the 1st 401 derby of the season. 1:25

New signing Omar Gonzalez also made his debut for the Reds and didn't mind being thrown into the Montreal-Toronto rivalry.

"I was up for it," Gonzalez said. "I didn't want to come here and take my time getting into things. I want to hit the ground running and that's what I did. I just wanted to get the first game over with."

Both sides had chances in the first half, but neither team could find the back of the net after 45 minutes of play.

Impact winger Orji Okwonkwo had his team's most dangerous chance in the eighth minute of play. After a failed clearance by Bradley, Okwonkwo ran towards the ball and pushed himself past the American before firing a shot off Toronto 'keeper Quentin Westberg.

TFC's best chance of the first half came in the 30th minute from Jacob Shaffelburg. Near the edge of the penalty area, the Canadian look a chance towards a goal, only for Impact 'keeper Evan Bush to scoop the low shot.

Montreal midfielder Samuel Piette also skied the ball over the net in the 33rd minute of play.

Despite a tense exchange between Impact striker Anthony Jackson-Hamel and Bradley only one yellow card was doled out in the first half. A second would be dished out to Montreal defender Daniel Lovitz in the second half.

The Impact lost Piette due to injury in the second half. The Quebecer walked off the field clutching his abdomen and was replaced by fellow Quebecer and midfielder Clement Bayiha.

With the Impact's main anchor down the middle gone, Pozuelo took advantage. The Spaniard received a headed pass from midfielder Marco Delgado before taking a few strides and firing a shot past Bush, giving Toronto a 1-0 lead. It was Pozuelo's eighth goal of the season.

The match was temporarily stopped for 25 minutes due to rain three minutes later. Environment Canada released a thunderstorm watch alert for the city of Montreal minutes before kick-off. Once play resumed, it took under five minutes of game time for more rain to return but the game played on.

"I'd rather come into the break up 1-0 than 0-0 because they gave us something to talk about and to organize ourselves for as we came out," Toronto FC head coach Greg Vanney said. "We had a little bit of momentum in that stretch but I'll take the goal anytime."

Jackson-Hamel nearly equalized in the 72nd minute after receiving a pass from Bayiha that sprung him into the penalty area but his shot from in close was stymied by Westberg.

Montreal had a flurry of chances in stoppage time, but couldn't solve Westberg by the referee's final whistle. Instead, Altidore's stoppage time goal from a free kick outside the box gave the visitors a 2-0 lead and secured the victory.