Harry Novillo scored his first goal in Major League Soccer to lead Montreal to a 1-0 victory over the Columbus Crew in the Impact's home opener Saturday afternoon.

Evan Bush has the Montreal Impact on a nice roll.

Bush made five saves Saturday to anchor Montreal's 1-0 MLS win over the Columbus Crew in its home opener. The shutout was Bush's third straight as the Impact Impact (3-2-2) is unbeaten in its last three games.

Harry Novillo's first MLS goal —scored at the 55-minute mark — was all the offence Montreal would need.

"The saves Evan made had such a big impact on this game," said Novillo. "Some of his saves are like goals for us.

WATCH | Novillo's 1st MLS goal turns out to be the game-winner: 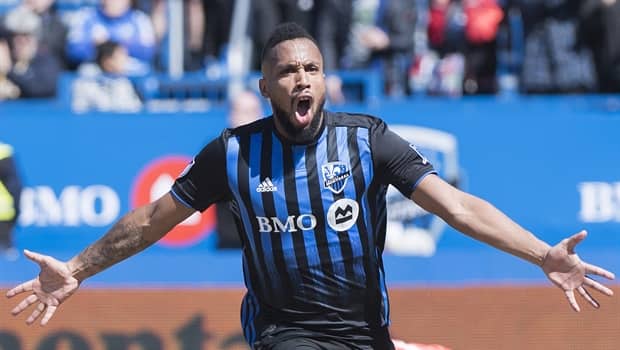 2 years ago
1:32
Montreal blanks Columbus 1-0, Harry Novillo's first MLS goal scored at the 55-minute mark. 1:32
"He keeps us in the game after we make mistakes. Evan did what he does best. A big thank you to him. It led to the three points."

Montreal captured the win following scoreless draws against New York City FC and D.C. United on the road. The Impact haven't allowed a goal in 276 minutes.

"We've been good defensively," said Bush. "Eleven guys go into having a clean sheet. That goes from me to Maxi [Urruti]."

After starting the season with six consecutive road games, Montreal played its first match at Saputo Stadium before 18,634 spectators on a warm but windy afternoon. It was the Impact's third contest in eight days.

The Impact were tested early Saturday, with Columbus (4-2-1) getting the best chances in the first half.

Bush made saves in close on Federico Higuain in the 22nd minute and another on Robinho in the 27th. The Crew came close again in the 39th minute when Gyasi Zardes's shot curled just wide of the post to Bush's left.

"I was told that the season just before I came was not a good one for Evan," said Impact coach Remi Garde. "We had to work a lot on his confidence, on his game.

"I'm happy to have Evan to stop those shots but I prefer we didn't use him so much."

Montreal broke the scoreless tie on Novillo's first goal in an Impact uniform following sloppy play at the back by Columbus.

The play started when striker Urruti intercepted a soft headed pass from Josh Williams to Jonathan Mensah. Urruti took two strides towards the net, stopped, then fed Novillo for the powerful strike from 18 yards out into the bottom corner of the net.

"That's Maxi Urruti's speciality, his pressing," said Novillo. "We can't follow him because he runs so much. That's how pressing wins games.

"He controlled the ball, turned and gave me a perfect pass. All credit goes to him."

It was a rare defensive breakdown for the Crew, who came into the contest having recorded a league-high four shutouts and allowed a conference-low four goals. Columbus began the day atop the Eastern Conference standings.

"This was a game that we deserved more out of it," said Columbus coach Caleb Porter. "We played really well, we had good control.

"We had more chances than they did. I can't remember a quality chance that they had until late when we were pushing for the goal. I remember six or seven chances that we had that should've been goals. I thought we were a bit unlucky in a few of those situations."

The visitors nearly tied the game in the 70th minute when a corner kick was cleared off the goal line and straight on to the crossbar by Impact defender Daniel Lovitz. The ball never fully crossed the line before Bush punched it away from his net.

Montreal earned its first victory of the season without midfielder Ignacio Piatti, who missed his fourth straight game with a knee injury. Piatti was injured in the Impact's 3-1 victory against Orlando City on Mar. 16.