Wayne Rooney scored on a penalty kick in the 92nd minute to give D.C. United a 1-1 draw with Toronto FC on Saturday night.

Wayne Rooney scored on a penalty kick in the 92nd minute to give D.C. United a 1-1 draw with Toronto FC on Saturday night.

Rooney went low and straight up the middle to beat goalkeeper Quentin Westberg for his 10th goal of the season.

D.C. United (8-4-7) got the penalty kick when Frederic Brillant was brought down by Toronto FC's Ayo Akinola in the area.

Nick DeLeon opened the scoring for Toronto FC (6-7-5) in the 19th minute, tapping home Richie Laryea's cross from the top of the 6-yard box. 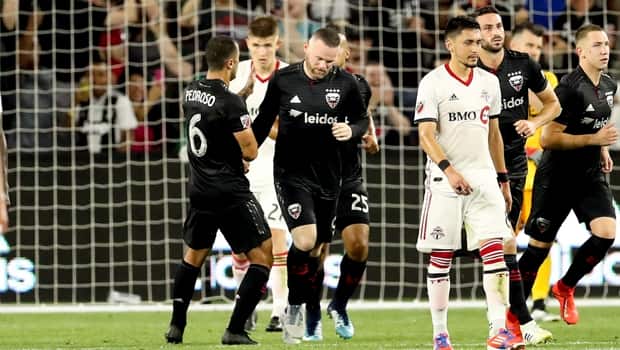 TFC burned by late PK in draw with DC United

2 years agoVideo
1:04
Wayne Rooney scored on a penalty kick in 2nd half stoppage time as DC United squeaked out a 1-1 draw with Toronto FC. 1:04

Justin Meram scored his first two goals for Atlanta United, netting the winner in the 83rd minute, in a 2-1 victory over the Montreal Impact on Saturday night.

Meram, who was acquired in a trade with Columbus in early May, was a step off the line when Brek Shea put a touch along the end line on a loose ball that ended on Meram's foot. The play started as a corner kick and a header sent the ball toward the goal, where a sliding Shea got his foot on it. 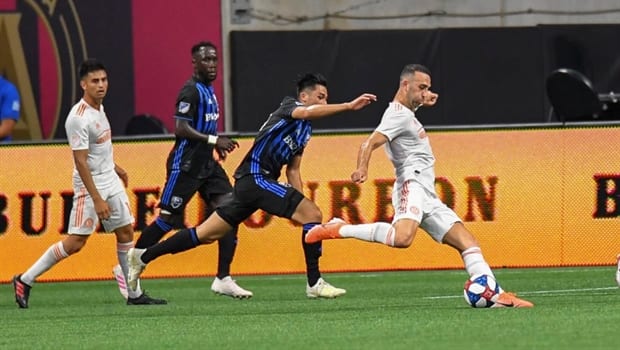 2 years agoVideo
1:33
Justin Meram scored his second of two goals in the match to seal Montreal's fate late in a 2-1 Atlanta United win. 1:33

Meram got his 40th career goal in the 35th minute when he bent a rocket from outside the box into the far top corner. Atlanta (9-6-2) is 9-3-0 when scoring first.

Montreal (8-8-3), which missed a chance to move into first place in the Eastern Conference, tied it early in the second half. Zakaria Diallo was standing in the box when Harry Novillo sent a low, hard shot toward the corner. Diallo redirected the ball with his knee for his second goal. The Impact only had five shots and that was the only one on target.