Richie Laryea scored in the 17th minute and Toronto FC extended its regular-season unbeaten streak to 17 games with a 1-0 victory over the Vancouver Whitecaps on Friday night.

As far as Richie Laryea is concerned, it's mental toughness that has Toronto FC on the verge of history.

Laryea's goal early in the match was all Toronto FC needed in a dominant 1-0 win over the Vancouver Whitecaps on Friday night at BMO Field. The victory stretched TFC's regular-season unbeaten streak to 17 games.

"I think it just comes down to being a very resilient group. This group fights to the end," said Laryea. "This is a very big club in this league so guys want to compete for trophies every single year."

Toronto's streak is the fifth-longest in Major League Soccer history and is two away from tying the 2004-05 Columbus Crew and 2010 Dallas FC for the record. Toronto ended last year's regular season on a 10-game unbeaten streak and has gone 4-0-3 this year. 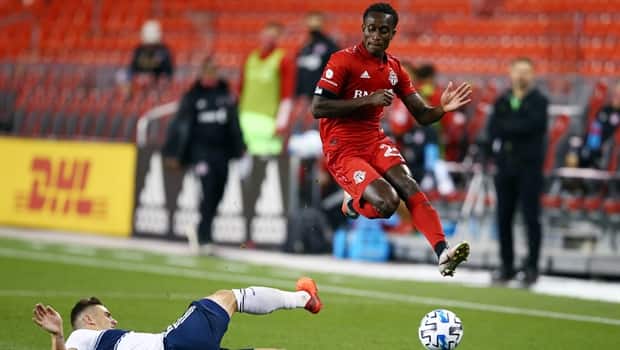 2 months ago
1:06
Toronto native Richie Laryea was the only player to find the scoreboard in Toronto's 1-0 win over Vancouver on Friday. 1:06

"I think we've done well, but we've done well both individually and collectively," said Toronto goalkeeper Quentin Westberg, who made one save for a clean sheet. "We've been playing together for a while now and we've really established a good identity."

It is the second time in four days that Toronto has beaten the Whitecaps (2-5-0), who have dropped three of their last four. Pablo Piatti had two goals in TFC's 3-0 win over Vancouver on Tuesday. 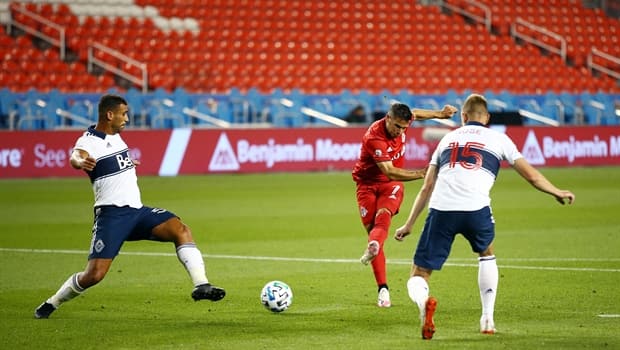 2 months ago
1:08
Pablo Piatti scored his first and second MLS goals to lead Toronto to a dominant win over Vancouver 1:08

"Just by virtue of the numbers they had on that backline it became difficult, the spaces weren't as clear to be able to get behind them or to really attack them," said Vanney. "That slowed the game down and when the game gets slowed down you have to be really patient."

Both teams and on-field officials took a knee before the opening whistle, with some players raising their fists in the air. The Whitecaps official team account tweeted a photo of the demonstration, focusing on a single Black fist in the air with the hashtag #BlackLivesMatter to announce that the match was underway.

In the 15th minute, Laryea raced toward a cross from Alejandro Pozuelo dribbling just inside the box, bouncing his shot along the ground and past diving Whitecaps goalkeeper Thomas Hasal to give the home side a 1-0 lead.

"I was pinching in to help with transition and I realized the ball's getting into the box and I didn't have anybody near me," said Laryea. "Thankfully I was able to get the ball right in front of me and it landed pretty nicely for me and I was able to put it back post."

With fans banned from the stadium to prevent the spread of COVID-19 and protect players and officials, Laryea and his TFC teammates' celebrations echoed off the grandstands at BMO Field.

Moments later, cheers broke out on the northeast corner of the stadium as fans watching the match from the street caught up to what had just happened. They had been vocal during the first quarter hour of the match but settled down after Laryea's goal.

Piatti had another sterling opportunity for TFC less than a minute later, taking a through pass to get behind Vancouver's defence. A diving Hasal got his outstretched hand on Piatti's left-footed shot to deflect the ball to safety.

Toronto continued to dominate play in the second half, picking apart the Whitecaps' defence repeatedly to set up more chances on Hasal. Each time the Vancouver 'keeper cleared the ball TFC's offence would reset, building pressure up again from its backline.

Marco Delgado had Toronto's best chance in the second half, squaring up for a close-range volley in the 82nd minute. Hasal was ready for the shot, catching it square in the chest.

Vancouver pressed again in the 84th minute with back-to-back corner kicks, with neither really testing Westberg.

Pozuelo almost doubled Toronto's lead in the 88th minute, taking a looping pass over his shoulder to break in alone on Hasal. The Whitecaps goalkeeper got both hands on Pozuelo's rocket to deflect it over the net.

It was the second of nine games between Canada's three MLS teams.

TFC, the Whitecaps and the Montreal Impact are staying in Canada for this phase of the season because of border restrictions during the COVID-19 pandemic.

Results during the all-Canadian stretch count in the MLS regular-season standings, and the top team through the nine games earns a spot in the Canadian Championship final.

The Montreal Impact host Vancouver on Tuesday and Toronto on Aug. 28. The Impact plan to have 250 spectators in the stands at Stade Saputo. The Whitecaps have said they will have no fans for their three home games in September.