The team with the best record in MLS shot itself in the foot Tuesday night.

Toronto FC suffered its first loss of the pandemic-interrupted season and saw its club-record 18-game unbeaten streak in MLS regular-season play end in a frustrating 1-0 loss to the Montreal Impact on Tuesday.

Rudy Camacho's winning goal came in the 14th minute off a corner prompted by a sloppy clearance from Toronto 'keeper Quentin Westberg. And Toronto blew a gilt-edged chance to pull even in first-half stoppage time when Alejandro Pozuelo opted for cute rather than clinical from the penalty spot.

Instead of shooting at goal, the Spanish playmaker nudged the ball to his right — leaving it for onrushing teammate Pablo Piatti to knock it in. But Canadian referee Drew Fischer waved it off, seemingly for encroachment, and Montreal was awarded a free kick with Piatti deemed to have interfered in the play.

"We gifted them the corner kick that led to their first goal and then we lose some marking responsibility and/or we just get beat at the back post. So that's 1-0, we're down" said Toronto coach Greg Vanney.

"Not sure what is going on on the penalty kick. We're down a goal, we should just be burying the ball in the back of the net and move on. So we gift them the fact they don't even have to make a save or do anything on a penalty kick." 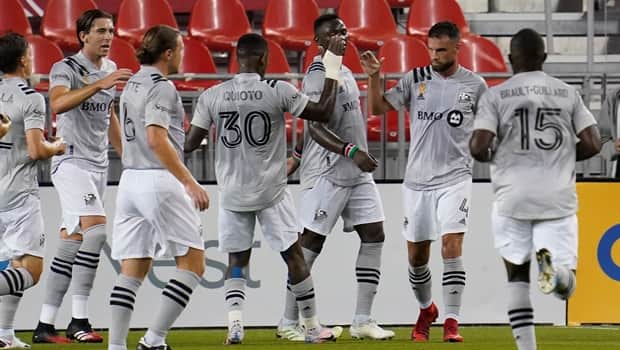 2 months ago
1:03
Rudy Camacho's 14th minute marker was the lone goal in a streak-busting 1-0 victory for the Montreal Impact. 1:03

In the past, the likes of Johan Cruyff and Lionel Messi have pulled off the penalty stunt. Impact manager Thierry Henry, then playing for Arsenal, was involved in a failed attempt to do it with penalty-taker Robert Pires in 2005.

"We scored but the referee [waved off] the goal," Pozuelo, who said he had talked with Piatti before the game on the penalty ploy, said in English.

"In other countries, they score like this," he added. "I don't know why here they said no goal."

Vanney, who used to take penalty kicks himself as a player, was clearly befuddled by Pozuelo's option, saying it made no sense.

The penalty came when Jozy Altidore went down after what seemed minimal contact with Camacho. The Impact disputed the call but Fischer pointed to the spot.

Impact goalkeeper Clement Diop, who had a fine game, did not mince words on the failed penalty.

Impact midfielder Emanuel Maciel was sent off in second-half stoppage time Tuesday for a tackle that scythed Michael Bradley to the ground, only to have the call downgraded to a yellow card on video review.

Bradley, not one to roll around the ground, was clearly in pain and took his time getting up.

He said while Bradley was sore, the hope was the injury wasn't serious.

"He's definitely hurting. We'll see to what extent and how long and what that all means," he added.

Toronto (5-1-3) had most of the possession and got in more good positions than Montreal but was unable to be clinical in front of goal. The Impact (4-3-1) stood firm and counter-attacked when possible.

For the third game in a row, there were no fans allowed at BMO Field due to the global pandemic. A group of chanting supporters, waving flags and firing off the occasional flare, took up a position on the other side of barriers at the northeast corner of the stadium.

With no one in the building, there were no anthems and the game started after players took a knee.

The Impact went ahead after a rare bad pass from Westberg led to a corner. Romell Quioto got the ball on the set piece and Camacho beat fullback Justin Morrow to head home the cross.

Toronto had not lost a regular-season match since Aug. 3, 2019, when it was beaten 2-0 at the New York Red Bulls. It officially went 9-0-9 during the run although the club lost 3-1 to New York City FC on July 26 in the round of 16 at the MLS is Back Tournament, where knockout games did not count in the regular-season standings.

Because of the travel restrictions due to the global pandemic, the three Canadian teams are currently playing a north-of-the-border round-robin with the top team advancing to Canadian Championship final against the winner of the CPL's Island Games.

Both teams got players back for Tuesday's game.

Altidore returned to the starting lineup while fellow forward Ayo Akinola came on in the 61st minute. Altidore sat out Friday's game in Montreal for personal reasons while Akinola had been nursing a hamstring injury.

Montreal midfielders Saphir Taider and Samuel Piette returned to the starting lineup after being with their wives for the births of their children. Spanish attacking midfielder Bojan (adductor) and forward Anthony Jackson-Hamel (knee) started on the Impact bench after returning from injury.

Toronto visits Vancouver on Saturday and Montreal on Sept. 9. After hosting TFC, Montreal flies to Vancouver for games Sept. 13 and 16.