First-half strikes by Romell Quioto and Lassi Lappalainen gave the Montreal Impact a 2-0 victory over the visiting Vancouver Whitecaps on Tuesday night in front of 250 fans at Saputo Stadium.

It may not have been exactly how Thierry Henry envisioned his first game at Saputo Stadium as Impact coach, but he is savouring the three points just the same.

Playing their first game in exactly one month, the Montreal Impact (3-2-1) came away with a 2-0 victory over the Vancouver Whitecaps (2-6-0) on Tuesday night in front of 250 spectators.

The Impact became Canada's first professional sports team to play in front of fans since the COVID-19 pandemic interrupted MLS play in March.

"It's better than when there's no one," Henry said. "We heard them. They encouraged us. It was important to have them. They supported the players until the very end.

"There's nothing better than having fans in the stadium."

The crowd of 250 — the maximum permitted inside Saputo Stadium under Quebec's public-health guidelines — were scattered across eight separate stands in the 20,801-seat venue.

Though pre-recorded fan noise from the stadium's speakers sometimes drowned them out, the few fans made themselves heard when Montreal took an early lead.

Missed coverage by Vancouver on the left wing gave Saphir Taider yards of space in the 18th minute. The midfielder delivered a lovely out-swinging cross with the outside of his boot into the box to Romell Quioto, who headed it home.

A deep ball by Emanuel Maciel found the speedy Lassi Lappalainen behind the Whitecaps' back line in the 40th. Lappalainen let the ball settle down before coolly firing into the far corner of the net, out of goalkeeper Thomas Hasal's reach.

A fan rang the stadium bell after every goal.

"The cohesion was there, the chemistry for us was there," said midfielder Samuel Piette. "There's a lot of stuff we need to work on, but I like the fact that when we have the ball, we try to play. We didn't just kick the ball forward and try to defend.

"We applied the game plan and they couldn't really find anything. It was hard for them to find any gaps and dangerous attacking spots to hurt us."

Other supporters without tickets gathered outside the grounds, chanting, drumming and setting off smoke bombs.

"It's kind of cool to be one of the first to be part of a live event," season-ticket holder Maxime Theriault said before kickoff. "It's like a private session or a private practice." 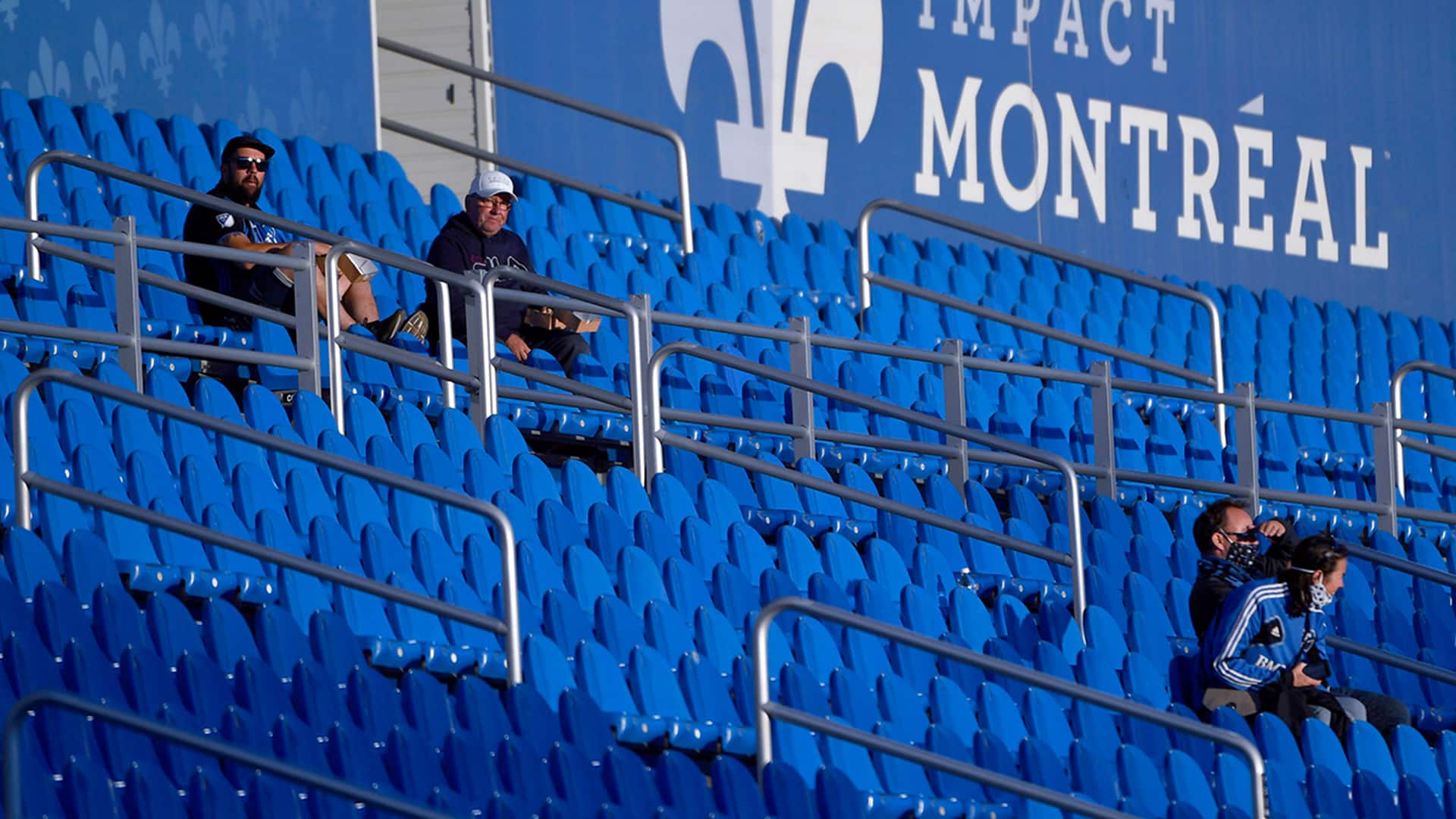 Montreal Impact plays in front of fans during pandemic

3 months agoVideo
2:03
The Montreal Impact allowed 250 fans into its 20,000 seat stadium to watch the game versus the Vancouver Whitecaps. It’s the first pro sports game played in Canada with fans in the stands since March. 2:03

Fans had their temperatures checked at the gate and were required to wear face masks at all times while inside the stadium.

"I never envisioned there would be any semblance of a season," said Impact supporter Dany Trudeau, who attended the game with his father. "We still don't know what will happen with the American teams. Right now we're taking any games they'll give us."

All players took a knee prior to kickoff in support of the Black Lives Matter movement. Impact goalkeeper Clement Diop raised his fist in the air.

The Whitecaps struggled offensively in the first half despite seeing more of the ball.

Down 2-0, Vancouver had a chance to halve the deficit in the 50th minute when Derek Cornelius went down in the box after Zachary Brault-Guillard kicked his thigh.

Lucas Cavallini failed to get much power into his spot kick. Diop dived to his left for the easy save, on his way to his second clean sheet of the season.

Substitute Anthony Jackson-Hamel nearly added a third goal for Montreal but his header from six yards out skimmed the crossbar in the 87th minute.

The Whitecaps dropped their third straight game after being blanked twice by Toronto FC last week. They have failed to score a goal in their last 379 minutes of play.

"I'm sick of having the same conversations over and over when we're just getting the same result every single time," said Cornelius. "It's frustrating.

"At the end of the day, we have to all take a serious look at ourselves in the mirror to see what we can all be better at so we can finally have something to show for. Because this is too much now."

The three Canadian MLS teams are facing each other three times — for a combined nine games — while COVID-19 border restrictions complicate travel to and from the U.S.

The results count in the MLS standings. The best team after nine games will earn a spot in the Canadian Championship final against the winner of this season's Canadian Premier League.