Undermanned Impact get no respite as Union delivers shellacking

Kacper Przybylko scored late in the first half and early in the second to help the Philadelphia Union beat the 10-man Montreal Impact 4-1 on Sunday night at Red Bull Arena.

Romell Quioto puts Montreal ahead, then down with red card for violent conduct

Romell Quioto put the Montreal Impact ahead. Then he put them down.

Kacper Przybylko scored late in the first half and early in the second to help the Philadelphia Union beat the 10-man Impact 4-1 on Sunday night at Red Bull Arena.

Quioto scored the match's first goal for Montreal (5-6-1) in the fifth minute, but he was ejected in the 15th minute for elbowing Mark McKenzie in the face — leading to the Union scoring four straight goals.

"Romell didn't control himself. We had to fight with 10 players again and it cost us. It's our fourth game in 10 days and the last two we played with 10 men. The schedule is tight and it won't be easy. For most of the game we tried to see if we could come back to the score," said Impact coach Thierry Henry. 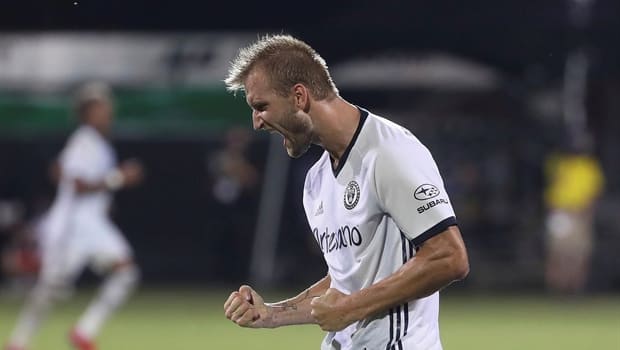 2 months agoVideo
1:04
Kacper Przybylko scored a pair including a fantastic header while on the run which turned out to be the game-winner. 1:04

Alejandro Bedoya tied it for the Union (7-2-3) in the 22nd minute, Kacper Przybylko connected in first-half stoppage time and again in the 47th, and Anthony Fontanta capped the scoring in the 65th.

Defender Karifa Yao played his first MLS game with the Impact, subbing in for Joel Waterman in the 53rd.

"I was nervous at the beginning," said Yao. "I have been training well for a while. I was expecting to be subbed-in eventually, and I prepared myself accordingly. The coach told me to be ready, and I have been working hard to make that moment happen. He told me to relax, to play just the same way I do during training and to have fun."

Montreal's next game is Wednesday against the New England Revolution.