TFC soured by non-call in MLS Cup loss to Sounders

Toronto FC leaves the Pacific Northwest with a sour taste in its mouth after a 3-1 loss to the Seattle Sounders in their third MLS Cup meeting in four years.

Toronto was irate at a non-foul call on midfielder Jonathan Osorio in the buildup to the opening goal of the game in the 57th minute Sunday. Seattle went up the field and Kelvin Leerdam's shot deflected off fullback Justin Morrow into the goal.

Toronto had dominated possession up until then with 65 per cent of the possession in a scrappy but entertaining first half that saw Seattle defending hard and looking for the counter-attack.

The Sounders had been living off scraps but Leerdam's goal spurred them on and Victor Rodriguez and Raul Ruidiaz added goals in the 76th and 90th minute. Toronto substitute Jozy Altidore scored a consolation goal in the 93rd minute, but it was too little, too late.

"It was a gut punch," Altidore said of the opening goal. "Just in terms of how we played. We dominated the game. Shades of 2016 (MLS Cup final) a bit, just this time not in penalty kicks. We have the game, we're creating chances. There's a foul on Osorio before but we know that, we know the standard of MLS refereeing is next to horrible. So you can't count on them bailing you out on anything."

Osorio was seething after the game, convinced that Cristian Roldan impeded him prior to the goal. 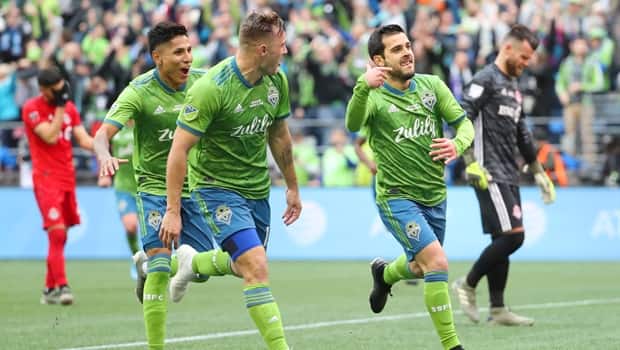 12 months ago
1:42
Seattle scored three unanswered goals in the second half to defeat Toronto 3-1 in the MLS Cup final on Sunday. 1:42

"It's unbelievable but it is what it is," he said. "It's one play of the game but everybody knows what should have been called on that play. And it changed the course of the game unfortunately. I'm not going to sit here and say that's the reason why we lost. But it changed the game. It's a crucial, crucial play."

Said captain Michael Bradley: "Until they scored in the second half, I'm not sure they had crossed midfield. Part of our frustration with the play with Osorio at midfield was that up until that point we had been on top of things."

"For me it's a foul. But look that's football," he added. "These things go both ways."

Osorio said Chapman, who called nine fouls on Seattle and eight on Toronto on the day, told him that there was no call because he had run into Roldan.

The Toronto camp clearly felt that Chapman, in letting some things slide, had helped Seattle given its expertise at counter-attacking.

"When the game is physical like that, it kind of plays into the hands of the defending team a lot of times," said Toronto coach Greg Vanney, who had no public complaints about Chapman. "Because a little bit of contact turns into a transition, it goes the other way and you find yourself in trouble."

Without Altidore starting on the bench in his comeback from a quad strain, Toronto lacked teeth up front and its body language showed frustration at times, with Alejandro Pozuelo — pushed up front in Altidore's absence — dropping back deep at times in a bid to get things going.

Vanney lamented the fact that some of his players had tried to do too much. Toronto is at its best when it moves the ball quickly up the field. That disappeared as the game wore on.

"The ball movement slowed down," he said. "Too many touches by individual players trying to make something out of nothing instead of letting the ball do the work. It got bogged down. And when it gets bogged against a team that wants to play in transition, you're in trouble."

Morrow refused to blame non-calls for the loss.

"I think it just comes down to being better in both (penalty) boxes," he said. "We couldn't finish to get a goal when we were on top of the game to give ourselves a really good advantage. And then we didn't make the play that we need to make in our own box."

TFC also had 65 per cent of possession in the second half. The shots were tied 14-14 with Toronto having a 6-5 edge in shots on target.

The game was a championship rubber match with Seattle winning the 2016 final via penalty shootout (5-4) and Toronto lifting the trophy with a 2-0 victory in 2017.

The Seattle breakthrough came in the 57th minute when Ruidiaz found Leerdam in the penalty box. Leerdam lost Nicolas Benezet and his shot, through the legs of Chris Mavinga, deflected in off Morrow for the Dutch fullback's first playoff goal.

It was Seattle's first MLS Cup goal from open play in 267 minutes — and another unhappy championship game memory for Morrow. The Toronto fullback hammered his spot kick off the crossbar in the penalty shootout loss in the 2016 Cup final.

Rodriguez, who had come on the field 15 minutes earlier, then capped off a nifty passing sequence with Nicolas Lodeiro and Gustav Svensson with a wonderful shot from the edge of the penalty box that eluded goalkeeper Quentin Westberg in the 76th minute. Svensson started the play by winning the ball back in the Toronto end.

The sellout crowd of 69,274 at CenturyLink Field, a record for a sporting event at the stadium, erupted as the Sounders celebrated en masse by the corner flag.

With Toronto throwing everything forward in search of a goal, Ruidiaz outmuscled Mavinga to the ball and scored in the 90th minute to complete the victory. It was his fourth of the playoffs.

The Peruvian wheeled away and whipped off his jersey, swinging it around his head in joy. He got a yellow card for the show and then was subbed off to a standing ovation.

Vanney, wearing his lucky playoff scarf, returned centre back Omar Gonzalez (hamstring) to the starting 11 with Laurent Ciman reverting to the substitutes. Altidore, who had not played since the Oct. 6 regular-season finale due to a quad strain, entered the game in the 68th minute.

CenturyLink Field was loud and dressed almost exclusively in green, save for a pocket of red Toronto FC supporters high up in the north end of the east stand.

While Toronto had more of the ball early, it lived dangerously with a few giveaways.

Westberg came up big in the 45th minute, stopping a dangerous Ruidiaz shot. Roldan found Lodeiro whose curling ball found Ruidiaz behind Gonzalez. The slight Peruvian accelerated past Gonzalez but Westberg blocked the shot with his legs.

A subplot Sunday was Bradley's contract. The 32-year-old, who joined Toronto in 2014 from AS Roma, is out of contract at the end of the year. But both he and the club declined comment on a report that a win Sunday would trigger another year at his current salary of $6.5 million US (second-highest in the league this season).

Now it is moot.

It was Toronto's first league loss since Aug. 3, snapping a 13-game undefeated streak (7-0-6). Seattle came into the game having won five straight and lost just twice in its last 12 league outings (8-2-2).