Since being acquired from the San Jose Earthquakes, Justin Morrow has grown to appreciate everything Toronto has to offer and would love nothing more than to hoist the MLS Cup in front of his adopted home.

Toronto defender uses his past for guidance, motivation in championship pursuit

Justin Morrow has started internationally for the United States at the CONCACAF Gold Cup and for Toronto FC in an MLS Cup final.

But the moment the Cleveland, Ohio, native learned he had been traded from the San Jose Earthquakes to TFC might have been just as nerve wracking – if not more.

"It was the day before my wedding so I'll never forget it. My wife is Paraguayan so we were down there for the wedding. I was at her house with her family just having a nice time together and it popped up on my phone [that] I needed to get in touch with the GM," Morrow told CBC Sports.

"I got in touch with him shortly — it was a quick two-minute conversation, 'Thank you for everything and we've sent you to Toronto.'"

It was a lot for the 30-year-old to process on the eve of one of the most important days of his life. While it's the nature of the business, Morrow knows the news must've been tough for his wife and fully appreciated her support.

"To find out that you're moving cities — basically changing up your life — is a big thing to take on in such a short period of time. Luckily, my wife handled it great. She was onboard for everything and it's been a blessing ever since," Morrow said.

Toronto has become home for Morrow and his family. His two-year-old daughter was born in the city and they feel an attachment to Toronto and Canada.

Morrow says that growing up, he always envisioned living in a big city and he guaranteed that — for at least the near future — after agreeing to a multi-year contract extension with TFC in November 2015.

"I'm not a guy that stays out very late but I just enjoy the fact that there's tons of things to do, restaurants [to try] — there's always something new to explore in the city," Morrow said.

It shouldn't be surprising that Morrow has embraced Toronto.

When news of his trade broke, Morrow was reassured by some of his Earthquakes teammates who had nothing but positive things to say after previously playing for TFC.

"They all told me that I was going to love it — the city, the people — they said that they all enjoyed their time there. I knew the club was big in terms of [fan] support and financially. I also knew they struggled for a long time winning games so I was nervous about it," Morrow recalls.

The 2013-14 off-season was a turning point for the franchise as TFC established the foundation of a future contender after years of disappointment and high turnover in the roster and front office.

Aside from picking up Morrow, new general manager Tim Bezbatchenko put his stamp on the club with the high-profile acquisitions of team captain Michael Bradley and Jermain Defoe, who would be swapped for star striker Jozy Altidore just 11 months later.

"The fans have always been there for TFC. From the beginning, you saw the enthusiasm for soccer here in Toronto. Lots of years of not winning can be tough on the supporters — they were fantastic all throughout that. The team has an identity, plays a certain way and I don't think that's something they've had in the past," Morrow said.

The 2016 season was full of many firsts for TFC but none bigger than its first MLS Cup final appearance.

Unfortunately for the Reds, they fell 5-4 to the Seattle Sounders after penalty kicks.

In the first round of sudden death, Morrow's attempt struck the cross bar leaving the door open for Sounders' defender Roman Torres who made no mistake. 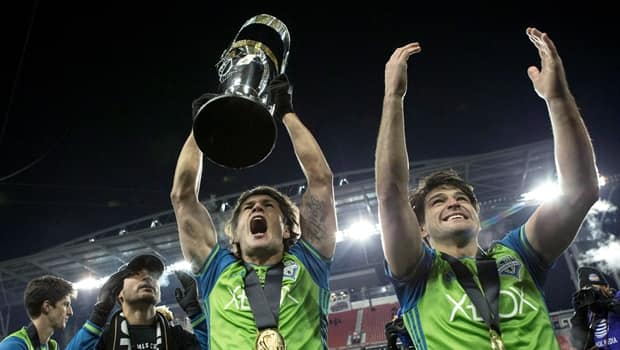 4 years agoVideo
1:26
Former TFC keeper stole the game for the Sounders on Saturday night for the MLS championship. 1:26

With the help of his teammates, Morrow was able to put that memory behind him and turned his sights towards the next season.

Thnx 2 my <a href="https://twitter.com/torontofc?ref_src=twsrc%5Etfw">@TorontoFc</a> teammates &amp; fans. You were amazing all season👏 I'll use this moment to make myself better. Still love this game! 💪⚽️

"It was tough to let our supporters down at home like that but these things happen. I'm not the first one to miss a penalty kick in a final. The thing that helped so much was knowing that we had a great team and that moving forward we were going to be a top team," Morrow says.

TFC proved that last year was no fluke capturing the Supporters' Shield — awarded to the team with the best regular-season record — and setting the single-season points record in the MLS (69).

Morrow sees a lot of the same traits from the 2012 league-leading Earthquakes squad he was a part of in this year's TFC squad.

He says both teams have depth — players capable of having an instant impact off the bench — and a belief that the team was going to perform well regardless of which eleven men were on the pitch.

But unlike that squad, Morrow hopes TFC doesn't suffer the same fate. The Earthquakes were bounced by the L.A. Galaxy in the Western Conference semifinal following a 3-1 defeat at home in the second leg.

"That 2012 team didn't rest on their laurels — we went down to L.A. in the first leg and won 1-0 [but] we basically lost that [second] matchup in about 30 minutes. The margins are very small — you have to be tuned in, focused, [and] engaged for 90 minutes plus each game and know that every play counts," Morrow said.

Morrow and his TFC teammates begin their playoff quest on Monday night in New Jersey, taking on the New York Red Bulls in Game 1 of their conference semifinal.