Vancouver Whitecaps forward Alphonso Davies is an ordinary teenager with an extraordinary potential. While he might become Canada's first men's soccer superstar, don't expect the humble young man to boast about his talents.

As another FIFA World Cup concluded, Canada's national men's soccer team remained on the sidelines — exactly where it has been since the end of the 1986 tournament.

Now, there's a new hope in the form of 17-year-old Alphonso Davies. Could this ordinary teenager with extraordinary potential be the country's first men's soccer superstar? 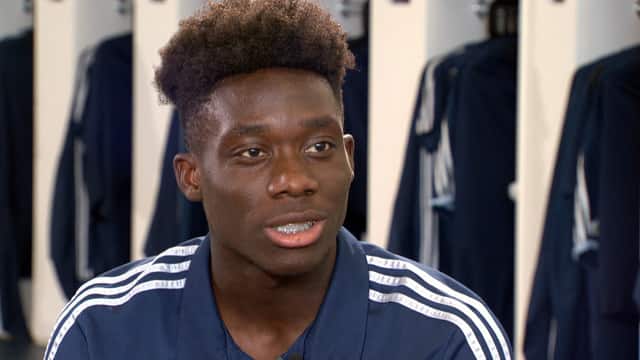 3 years agoVideo
9:20
Teenager Alphonso Davies could be Canada's first men's soccer superstar. Ian Hanomansing sat down with Davies to talk about what's ahead. 9:20

He's certainly making a case for it with his play as a member of Major League Soccer's Vancouver Whitecaps and recently as a member of the national team. Just don't expect him to boast about his talents.

"I'm trying to stay humble for my mom," Davies told The National's Ian Hanomansing. "She gave me the opportunity and I don't want to be getting a big head and then something happens and she goes 'what happened?'"

"I don't want to disappoint her."

Davies was born in the Buduburam refugee camp in Ghana to Liberian parents fleeing their country's civil war. The family came to Canada when he was five, settling in Edmonton after spending a year in Windsor, Ont.

"Seeing where they come from, seeing where we are now, I think that's one of the reasons why I try and keep my head level," Davies said. "Every game I play, [I] play like it's my last game."

Talented, but still 'a kid'

At first glance, you'd be forgiven for mistaking the grounded but perpetually smiling Davies for any other teenager — he plays foosball and Fortnite with his friends and still has braces. Whitecaps head coach Carl Robinson says he's still "a kid" and does his best to keep his young charge heading in the right direction.

"What I ask him to do is while he's in the facility that he be professional," Robinson said. "He needs to learn what it takes to be a professional and the only way you learn that is by being involved in it and being around it and by making mistakes.

"And I have to let him make a few mistakes for me to be able to teach him, but I also have to make sure that he doesn't make certain mistakes, because if he does there might be no coming back."

What sets Davies apart from the average teenager is his prodigious talent on the pitch. He joined the Whitecaps development program at age 14 and made his MLS debut a year later. This season Davies has erupted as an on-field presence, scoring three goals and adding eight assists for Vancouver so far en route to earning his first All-Star nod.

"He's got tremendous ability with the ball. He's one of these players that runs as quick with the ball as without the ball, a bit like Ryan Giggs," Robinson said, referring to the former Manchester United great. "He's able to change direction very quickly in full speed as well which causes defenders problems.

"He's got a lot to improve yet, but the natural aspect of the game is phenomenal for him and the hard things he does very, very well and the simple things he needs to work on, because they are probably the most important things in football."

Davies' club future remains up in the air — he's reportedly being scouted by some of Europe's premier clubs — but what is certain is his role as a member of the rebuilding Canadian men's national team.

That wasn't always a guarantee; Davies only had permanent resident status until last summer, when he officially became a Canadian citizen. He had plenty of support from the Whitecaps

"I'd just be walking around the [team] facility and have a staff member ask me a random question, just 'hey, what's the prime minister's name?' and I have to answer it quick, so that really helped me a lot," Davies said.

Davies already has three international goals in just six appearances for Canada and he cherishes the ability to don the red and white.

"They show him so much love and that's what's important," said Whitecaps teammate Kei Kamara, who came to the United States as a teenager from Sierra Leone. "He's found a home for himself and his family and when you can have that, you're going to give your all."

The duo might not be teammates for much longer. Once Davies turns 18 in November, the Whitecaps could sell his rights to an interested international club for a sizeable transfer fee.

"To be honest, I have no idea," Davies said about the rumours. "I really don't worry about that. That's not my side of the game, my side is to perform on the pitch."

Vancouver president Bob Lenarduzzi has yet to divulge how much Davies' services are worth to the club."We're waiting to see what the market bears, so we're still going through that process, but it will be a significant amount of money," Lenarduzzi said.

Canadian men's soccer has yet to have a bona fide superstar. In the women's game though, Canada's Christine Sinclair will go down as one of the most impactful players in the sport. The 35-year-old from Burnaby, B.C., is second in the world in most goals scored, owns a pair of Olympic bronze medals and a Pan Am Games gold and was named an Officer of the Order of Canada in 2013.

But for the men, a new generation of potential stars could be emerging. While Davies might lead the charge he's hardly alone. Cyle Larin, who turned heads with Orlando City in the MLS and currently plies his trade with Turkish juggernaut Besiktas, is among a young crop of Canadians ready to begin life under new head coach John Herdman.

Participation in Qatar in 2022 might be an unrealistic expectation, with most fans' sights set on the 2026 tournament hosted by Canada, Mexico and the U.S. While the World Cup host usually earns an automatic berth in its home tournament, FIFA has yet to confirm whether all three countries will get guaranteed spots.

As for Davies, who was a part of the joint bid's delegation at the winning World Cup vote in June, his focus is on improving and growing as a player.

"There's people out there, Canadians out there, that have high expectations for me, but I mean, I'm still a kid, still trying to learn the game," Davies said. "I'm just trying to develop my skills as much as possible."