Whitecaps take down Union, Orlando too much for TFC, Impact draw with KC

Andrew Jacobson, Kekuta Manneh and Christian Bolanos scored to help the Vancouver Whitecaps hand the Philadelphia Union their first home loss of the season with a 3-2 result on Saturday. Andrew Jacobson, Kekuta Manneh and Christian Bolanos scored to help the Vancouver Whitecaps hand the Philadelphia Union their first home loss of the season with a 3-2 result on Saturday.

Bolanos had the key goal in the 84th minute, with Chris Pontius scoring the final goal for Philadelphia late in stoppage time. Bolanos took a pass from Erik Hurtado near the top left corner of the 18-yard box, made a move and right-footed a shot through the legs of defender Keegan Rosenberry for his fifth goal of the season. The ball, which may have deflected off Rosenberry, slipped just inside the left post.

The Union (7-5-5), who were 6-0-2 at home and lead the Eastern Conference, opened the scoring in the 14th minute. Fabian Herbers' shot from 15 yards out hit the crossbar and Sebastien Le Toux chested the rebound to Roland Alberg for his fifth goal.

Jacobson tied it five minutes later for the Whitecaps, heading in a Bolanos corner kick that went through the hands of Union keeper Andre Blake.

Vancouver (7-7-3) made it 2-1 with a long counter by Kekuta Manneh, who deked two defenders and sent a right-footed shot from just outside the 18 that deflected in off the right cross bar. 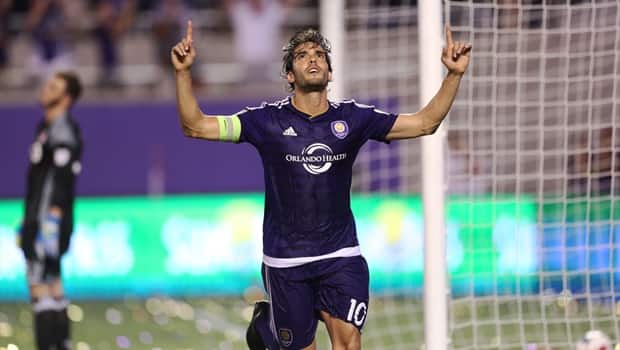 Kaka scored on a penalty kick in the 10th minute of stoppage time to give Orlando City a 3-2 victory over Toronto FC on Saturday.

Julio Baptista drew the foul, going to the turf after battling with Toronto's Drew Moor for a diagonal cross into the middle of the area.

Orlando City (4-3-8) took a one-goal lead each time it scored — first on Canadian Cyle Larin's eighth goal of the season in the fifth minute and again when Adrian Winter's header made it 2-1 in the 83rd minute.

Toronto goalkeeper Clint Irwin left with a leg injury in the 70th minute and was replaced by Alex Bono, who was making his first career MLS appearance. Irwin had played every minute this season prior to injury.

Jordan Hamilton tied the game at one apiece in the 47th minute with a left-footed shot that finished Jonathan Osorio's side-footed flick. Justin Morrow smashed home Sebastian Giovinco's cross to tie it again in the 90th minute.

Toronto dropped to 5-6-4 in the MLS this season.

Lucas Ontivero and Ignacio Piatti scored for the Impact.

Dwyer continued his dominance over the Impact, scoring his eighth and ninth career goals against Montreal. No other MLS player has more than seven goals against the Impact.

His first of the night tied it at one the 21st minute. Dwyer got his head on Roger Espinoza's cross from close range, giving goalkeeper Evan Bush no chance to make the save.

Dwyer's second tied it at 2 in the 59th. He fired a left-footed strike from just outside the 18-yard box that found the bottom corner of the net, just out of Bush's reach.