In a strange year, Major League Soccer heads into Decision Day on Sunday with some surprises.

For the first time since 2016, the Colorado Rapids are in the MLS playoffs. And they made it to the post-season even after missing five games because of a coronavirus outbreak.

In a strange year, Major League Soccer heads into Decision Day on Sunday with some surprises. Like the Rapids.

"Everyone just feels relieved. It's been a tough year, but to finally get over that hump and be in the playoffs is huge," Colorado midfielder Kellyn Acosta said. "I know everyone's excited. But I think for us, we know it's just one box that we just checked off of our list."

Decision Day is the last day of the Major League Soccer regular season. The games are all played at the same time in each of the two conferences.

In the East, the Philadelphia Union and Toronto FC are in a dead heat for the Supporters' Shield going into the final weekend. Losses knocked the Columbus crew and the Portland Timbers out of the running for the annual award given to the team with the best regular-season record.

The Union can claim the Shield with a victory over New England, regardless of the result in the final game between Toronto and the Red Bulls. If Philadelphia draws with the Revolution and the Reds win, Toronto will win the Shield and, more importantly, home field advantage through the playoffs.

"Home" in this odd season for Toronto is Connecticut. Travel restrictions in place because of COVID-19 forced the league's Canadian teams to play out a portion of the regular season in the United States.

Toronto played at Pratt & Whitney Stadium in East Hartford, the Montreal Impact were based at Red Bull Stadium in New Jersey and the Vancouver Whitecaps played at Providence Park in Portland, Ore. 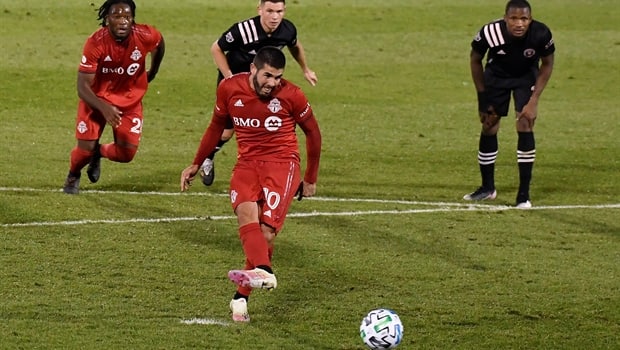 3 months agoVideo
0:47
Alejandro Pozuelo delivers the winner on a penalty in the 84th minute as Toronto FC defeats Inter Miami 2-1. 0:47

Major League Soccer decided to use points per game this season to determine playoff position — something that helped the Rapids, who played fewer games. After a FIFA break for international play, the playoffs will start Nov. 20 with the MLS Cup title game set for Dec. 12.

In the Eastern Conference, eight of the playoff spots are already set, with five teams still in contention for the final two entering the last day. The bottom four will meet in play-in matches. Montreal, Chicago, Atlanta United, Inter Miami and DC United all still have a path to the post-season. FC Cincinnati is the only East team that was eliminated before Decision Day.

In the West, the field is already set with teams playing for position on Sunday. The Vancouver Whitecaps, the LA Galaxy, Real Salt Lake and the Houston Dynamo have been eliminated in the West.

The Timbers, Sporting Kansas City and the defending champion Seattle Sounders are all in play for the top spot in the West standings despite the oddity of having different total games because of cancellations.

Sporting announced Thursday that a first-team player had tested positive for COVID-19 and was isolating. Sunday's match at Real Salt Lake is still on.

One of the surprises out West was the San Jose Earthquakes, who lost eight straight matches at one point in the coronavirus-shortened regular season. The Quakes have won their last two games heading into Sunday's game against the Sounders.

San Jose clinched a berth with a 3-2 victory over LAFC on Wednesday. The league's all-time top scorer, Chris Wondolowski, scored his 166th goal in the win.

The Quakes' victory eliminated the Whitecaps in a frustrating season. Playing home games in Portland was difficult, but the MLS decision to use points per game all but skewered Vancouver's playoff hopes.

"Nothing's fair this year," Whitecaps coach coach Marc dos Santos said when the decision was handed down. "We just have to deal with it."