Mexico takes control of Group A with win over Canada

Andres Guardado had two goals in the second half, Roberto Alvarado also scored and Mexico beat Canada 3-1 in the group stage of the Gold Cup on Wednesday night in Denver, Colo.

Mexico coach Gerardo Martino held out one of his best players against Canada in the Gold Cup. But when an injury left the team short-handed, he subbed in Andres Guardado.

The captain came through to lead his national team to victory.

Guardado had two goals in the second half, Roberto Alvarado also scored and Mexico beat Canada 3-1 in the group stage of the Gold Cup on Wednesday night.

Mexico has won its first two matches by a combined score of 10-1 and took control Group A despite losing midfielder Erick Gutierrez in the first half. 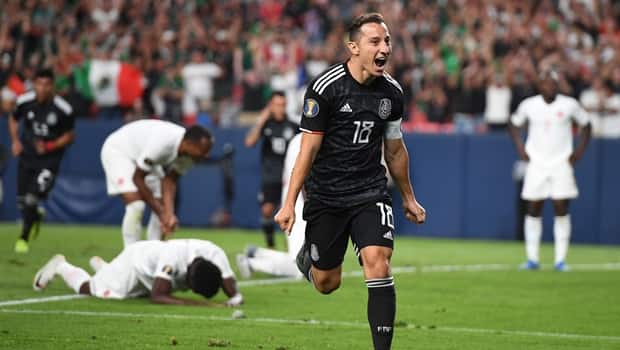 2 years ago
1:18
After entering the game as a substitute, Mexico's Andres Guardado scored a pair of second half goals to help lead his country to a 3-1 win over Canada at the 2019 CONCACAF Gold Cup. 1:18

There was no update on Gutierrez after the game, and Martino didn't want to speculate on the severity of the injury.

"I do not know anything yet," he said. "Once I said too much too soon and that player is now, basically, practicing and working with the team."

The third leg of pool play for Group A moves to Charlotte, North Carolina, on Sunday. Canada will face Cuba in the first match of the day followed by Mexico against Martinique in the second match.

The top two teams in the four-team pool advance to the quarterfinals starting on June 26. Martinique used two goals in the second half to beat Cuba 3-0 in Wednesday's first match to even its record to 1-1.

Cuba, which has been outscored 10-0 in its two games, was eliminated from the Gold Cup.

Both coaches didn't put their most talented teams on the field on Wednesday to conserve legs and lungs for a deeper run in the tournament and a possible rematch in the knockout rounds. Wednesday's match could be repeated in the semifinals should both teams reach that round.

"We didn't want to show everything tonight, we wanted to learn a lot from Mexico," Canada coach John Herdman said. "Tonight we lost, but we learned — and we learned a lot. We've been working back from that tournament semifinal in our planning. There's a marathon here we're running."

That was Martino's strategy, too, until Gutierrez was carted off in the 33rd minute with a leg injury and the game scoreless in front of 52,874 fans at Mile High Stadium.

"Those are things that happen in soccer. They are out of our control," Alvarado said. "It's a bit sad the topic of so many injuries, but we will see in the following days what happens with Gutierrez. Hopefully it's not too bad, because he is an important player to our team."

Mexico took control soon after Gutierrez went out when a ball was sent across into the box where Rail Jimenez got a shot off between two Canadian defenders.

Milan Borjan made a diving save, but the rebound went to Alvarado standing alone in the box, and he booted it in to give Mexico a 1-0 lead in the 40th.

Jimenez nearly gave Mexico a two-goal lead at halftime when he blistered a shot on net that Borjan batted away during injury time.

The Mexicans got their second goal when Guardado, who came on for Gutierrez in the first half, stole a pass in the offensive zone, dribbled to the top of the box and curled a high shot just inside the left post in the 55th.

Canada started to carry the play and made it 2-1 when Jonathan David stole the ball from Mexican defenseman Nestor Araujo and fed Cavallini coming into the box, and his shot just got under goalkeeper Guillermo Ochoa in the 75th.

Guardado answered in the 77th when his shot from close in deflected of the foot of defenseman Donnie Henry and just under the crossbar.

"We dropped the rhythm with the ball, but we won," Alvarado said. "We need to learn from that and correct our errors."