After cruising to a 2-0 lead, Canada collapsed in the second half, giving up three consecutive Haitian goals to let a spot in the CONCACAF Gold Cup semifinals slip away.

At times the Canadians looked so sure and strong on the pitch, building a 2-0 lead in the first half and seemingly cruising to victory.

Then there were times when the young Canadian squad looked shaky and unsure – they collapsed in the second half, giving up three consecutive Haitian goals to let a spot in the CONCACAF Gold Cup semifinals slip away.

The Haitians' remarkable Gold Cup run continues. The Canadians, like so many times in the past, are left wondering what might have been – Canada was trying to qualify for the semifinals for the first time in 12 years. 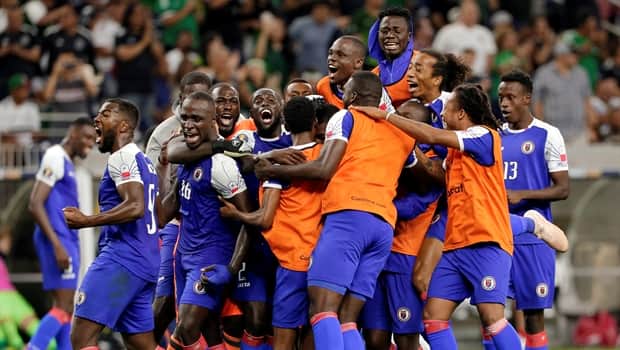 2 years agoVideo
2:19
Canada lose in the quarter-finals of the Gold Cup for the third time after allowing three goals to Haiti in the second half. 2:19

It all started so promising for Canada. Ottawa's Jonathan David continued his sensational play in his first international event. The 19-year-old opened the scoring for Canada at the 18-minute mark, a perfect strike past the Haitian keeper. David finishes with six goals in his first Gold Cup appearance, tying Ali Gerba and Dwayne De Rosario for the most goals in the CONCACAF Gold Cup by a Canadian.

David was born in Brooklyn, N.Y. but moved back to his parents' home country of Haiti just months into his life. He spent his childhood in Port-Au-Prince before the family moved to Ottawa. That made the quarter-final game against Haiti a little more special on Saturday.

It took the Canadians about ten minutes to find their footing in the match, but once they did they were dominant in the first half. After David's marker, Lucas Cavallini increased Canada's lead to 2-0 after taking a brilliant pass from Scott Arfield and guiding the ball into the back of the net.

It was Cavallini's fifth goal of the tournament – he had a hat trick in Canada's 7-0 win over Cuba.

The Haitians looked like a different team in the second half – so too did the Canadians.

Haiti's Duckens Nazon scored early, just five minutes into the second frame, after a horrible defensive gaffe by Canada. With momentum on the Haitians' side they continued to attack Canada, converting on a penalty kick with 20 minutes remaining in the match. Then Hervé Bazile struck the ball into the left side of the gaping net to square the score 2-2.

With the Canadians unravelled, Haiti's Wilde-Donald Guerrier delivered the final blow to make it 3-2. Canada thought they had tied the game with less than 10 minutes remaining, however, it was called offside. That would be as close as the Canadians would get.

Back to the drawing board

Coming into the quarter-final match, Canadian manager John Herdman made it very clear getting a win against Haiti and advancing to the semifinals was the goal, but he also hinted at a lot more being a stake.

"These players are very clear on what their mission is: To bring respect to our flag in the football world and step forward with a talented group," Herdman said.

Saturday night's loss to Haiti was a massive step backwards for a team and program so badly wanting to head in the right direction.

Canada's men's national team is currently ranked 78th in the world, wedged between Iraq and Curacao. The team has twice captured the Gold Cup, in 1985 and 2000. The event takes place every two years. Canada's best results since winning it all 19 years ago is a pair of third-place finishes.

This was Herdman's first true international test event as the national men's coach since taking over for Octavio Zambrano in January, 2018. He's been bold with his aspirations for the program, with the ultimate goal of qualifying for the 2022 World Cup in Qatar. He also wanted to build a solid foundation in advance of the 2026 World Cup being held in Canada, the United States and Mexico.

It will have to wait after this early exit from the CONCACAF Gold Cup.