Christine Sinclair honoured as Canadian soccer player of the decade

Christine Sinclair, who is one goal away from tying Abby Wambach's world-record total of 184, has been named the Canada Soccer player of the decade.

Christine Sinclair, who is one goal away from tying Abby Wambach's world-record total of 184, has been named the Canada Soccer player of the decade.

The special award honours the 36-year-old from Burnaby, B.C., for "an unparalleled 10 years of world-class performances in which she continued to build a legacy as of one of Canada's greatest athletes of all time," according to the Canadian Soccer Association.

The Canadian captain, who was 16 when she made her senior debut for Canada in March 2000, scored goal No. 183 last month in a 3-0 win over New Zealand at a tournament in China.

It marks the first time Canada Soccer has named a player of the decade.

"Christine Sinclair is a once-in-a-generation athlete that has been at the heart of Canadian sport for over 20 years, but what she accomplished in the past 10 years has changed the sport forever in our country," Canada Soccer president Steven Reed said in a statement. "Christine is the Canada Soccer player of the decade and unquestionably one of the greatest and most-loved athletes Canada has ever watched."

Sinclair won Canada Soccer's female player of the year award seven times in the past decade, and seven times as well from 2000-09.

The veteran forward has also led the Canadian team in scoring 16 years. 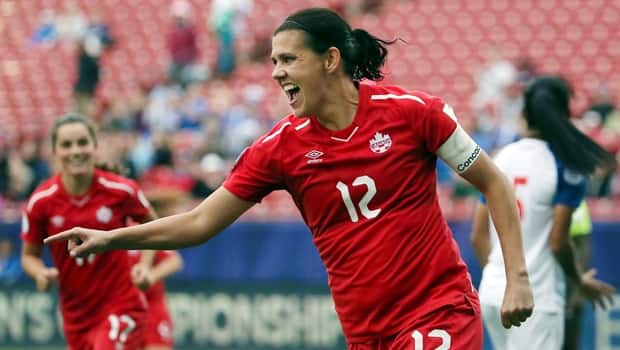 Christine Sinclair focused on team as she approaches scoring record

2 years agoVideo
2:23
The Canadian superstar is closing in on soccer's career goals record, but she would rather talk about leading her country to a win at the World Cup this summer. 2:23

Sinclair, who leads Canada in international appearances (289), has 10 goals in 21 matches at five FIFA World Cups and 11 goals in 15 matches at three Olympic tournaments.

The decade saw Sinclair lead Canada to back-to-back Olympic bronze medals in 2012 and 2016. She was named the 2012 Lou Marsh Trophy and Bobbie Rosenfeld Award winner and was the Women's Professional Soccer (WPS) championship MVP in 2011.

Sinclair, Canada's flag-bearer at the London Olympics' closing ceremony in 2012, also played in three FIFA World Cups and was a four-time finalist for FIFA World player of the year.

She scored 64 goals for club and 84 goals for Canada during a decade that saw her capture a country's attention with a hat trick in the nail-biting Canada-U.S. Olympic semifinal in 2012. Four years later she scored the winning goal for another bronze medal in a win over host Brazil in the Rio games.

Sinclair is also the first soccer player appointed as an Officer of the Order of Canada and the first to have her name engraved on Canada's Walk of Fame.

She received the Queen's Diamond Jubilee Medal in 2012, earned honourary degrees from Simon Fraser University in 2013 and Kwantlen Polytechnic University in 2015, and was honoured by Women Against Multiple Sclerosis for her outstanding charity work.

In 2012, she rewrote the national team record book with 23 international goals in 22 games, including a tournament-high six at the Olympic Games. In 2010, she had 13 goals and a national-record nine assists, scoring the winning goal as Canada won its second-ever CONCACAF Women's Championship.

Sinclair won WPS club titles with FC Gold Pride and the Western New York Flash in 2010 and '11. She won the NWSL Championship in 2013 and 2017 with the Portland Thorns, for whom she serves as captain.