Paris Saint-Germain tore apart five-time European champion Bayern Munich, and got goals from bickering forwards Edinson Cavani and Neymar in a 3-0 win that was the night's defining performance.

More routs, stunning losses and late drama made for a standout night in the Champions League on Wednesday.

Paris Saint-Germain tore apart five-time European champion Bayern Munich, and got goals from bickering forwards Edinson Cavani and Neymar in a 3-0 win that was the night's defining performance.

Yet another four-goal display from Manchester United this season seemed almost routine as Jose Mourinho's team won 4-1 at CSKA Moscow.

Teams swept aside by Man United and PSG two weeks ago bounced back. Basel hit Benfica with counter attacks in a shock 5-0 victory, and Celtic won 3-0 at Anderlecht.

The drama peaked at Atletico Madrid's new stadium where Chelsea trailed at halftime and struck with the last kick to clinch a 2-1 victory.

Here is a look at Wednesday's games: 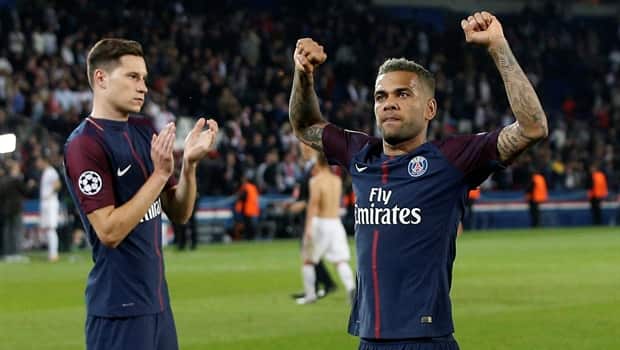 In just the second minute, Neymar created the chance for Brazil teammate Dani Alves to open the scoring. Cavani was set up by Kylian Mbappe to make it 2-0 before halftime. Neymar scored in the 63rd after Bayern failed to deal with Mbappe's threat.

For PSG, two wins, eight goals scored and none conceded means a clear lead in the group.

Hammered 5-0 at home by PSG, Celtic dished out a 3-0 home loss to struggling Anderlecht.

The Scottish champion got goals from Leigh Griffiths, Scott Sinclair, and an own-goal by Kara Mbodji, and next travels to face Bayern.

Romelu Lukaku might be the best striker in Europe on current form.

Lukaku scored twice in the first half as Man United cruised past CSKA Moscow 4-1 in Russia. It's now 10 goals in nine games for Lukaku at his new club this season. 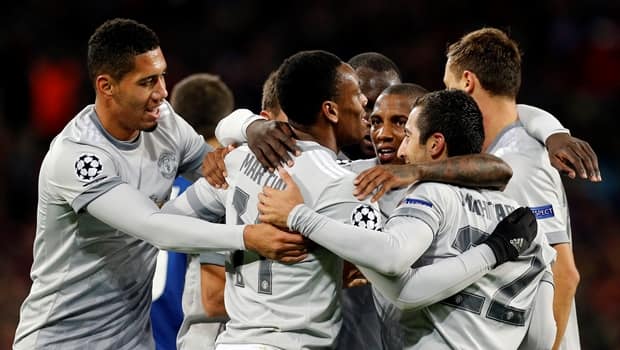 Anthony Martial converted from the penalty spot, between setting up Lukaku's goals, and Henrikh Mkhitaryan scored in the second half. CSKA's goal came in the 90th minute from substitute Konstantin Kuchaev.

Basel was brushed aside 3-0 at Old Trafford in the opening round, but was rewarded with a 5-0 win over Benfica for giving a first Champions League start to Dimitri Oberlin, a Cameroon-born forward on loan from Salzburg.

On his 20th birthday, Oberlin used his pace and directness to score two goals, set up Michael Lang for the second-minute opener and earn a penalty that Ricky van Wolfswinkel scored.

Benfica had midfielder Andre Almeida sent off for a two-footed tackle when trailing 3-0.

Man United has six points, Basel and CSKA both have three and play each other next in Moscow.

Chelsea took control of the group with an unlikely 2-1 victory in the first Champions League game at Atletico's Metropolitano stadium, which will host the final next season.

Substitute Michy Batshuayi got free in the Atletico goalmouth to score in the fourth minute of stoppage time to win the game. Former Real Madrid forward Alvaro Morata scored early in the second-half to cancel out Antoine Griezmann's first-half penalty for Atletico.

Striker Diego Costa, who left Chelsea for Atletico this month, watched in the stands.

After losing 6-0 at Chelsea, Qarabag lost 2-1 at home to Roma which laboured to win in Azerbaijan.

Kostas Manolas and Edin Dzeko scored for Roma inside 15 minutes, while Pedro Henrique got Qarabag's first ever Champions League goal in the 28th.

Barcelona needed an own goal from Sebastian Coates to win after Lionel Messi's free kick early in the second half deflected off two defenders. 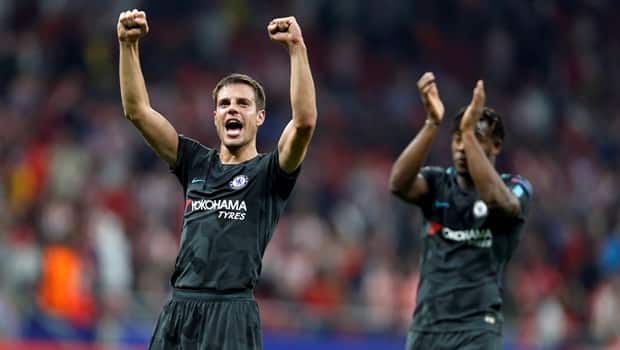 Juventus was held until deep into the game when Argentina forward Gonzalo Higuain came on as a substitute. Higuain scored in the 69th and was involved in the second, playing in Paulo Dybala, whose shot was hooked off the line by a defender but rebounded in off Mario Mandzukic.

Barcelona, which already beat Juventus 3-0, next hosts Olympiakos. Juventus hosts Sporting, with both on three points.