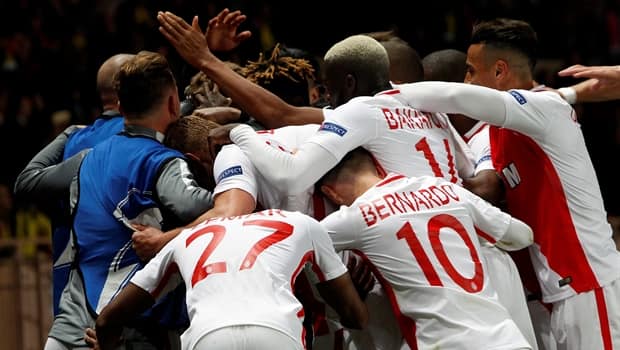 Dortmund trailed 3-2 from the first leg in Germany and conceded twice inside 20 minutes — meaning it needed to score three times to have a chance. Attacking midfielder Marco Reus pulled one back in the 48th minute.

But substitute Valere Germain, just after replacing Mbappe, added the third in the 81st minute to seal a 6-3 victory on aggregate. It was Monaco's 141st goal of an incredible season that has captured the imagination and made the rest of Europe take notice.

The home leg in Germany was overshadowed by an attack on the Dortmund team bus as it headed to the stadium. Prior to Wednesday's game, Dortmund's bus was held for 20 minutes by police at the team hotel. Kickoff was briefly delayed.

Dortmund made the worst possible start to the match, conceding a goal after just three minutes.

Left back Bernard Mendy ran at the heart of Dortmund's defence and hit a fierce shot that goalkeeper Roman Burki spilled. Mbappe slotted the loose ball into the bottom left corner for his 22nd goal of a breakthrough season that has made the 18-year-old arguably the most sought after young talent in world football.

He had scored twice in the first leg and in both legs against Manchester City in the Round of 16.

Falcao's diving header, the 27th goal of his comeback season, made it 2-0 in the 17th minute.

Reus pulled one back when he turned in a right-wing cross from substitute Ousmane Dembele to offer some hope, before Germain sprinted through to send Stade Louis II crowd into raptures.

Monaco, which reached the semifinals in 2004 on its way to the final, will join Juventus, Real Madrid and Atletico Madrid in Friday's draw.

After the drama of last week's attack, this was a welcome return to euphoric, attacking football that was a joy to watch from start to finish.

Dortmund defender Marc Bartra, who needed hospital treatment following injuries to his wrist and arm after a bus window was shattered, sat watching from the team bench.

Juventus made sure there were no more miracles at Camp Nou on Wednesday, as the Italian visitors held Barcelona to a 0-0 draw and advanced to the Champions League semifinals.

The second-leg stalemate sealed a 3-0 win on aggregate and came six weeks after Barcelona's historic 6-1 thrashing of Paris Saint-Germain, when the home side became the first team to ever overturn a 4-0 loss in the competition.

Juventus showed all the poise and experience that PSG had sorely lacked in the previous round.

"Juventus is a great team and they were better than us," Barcelona defender Gerard Pique said. "It was a difficult result to turn around, although we tried until the end. They are an Italian club and defend very well. I wish them the best and I think they can win the title."

True to the Italian tradition of defending an advantage, goalkeeper Gianluigi Buffon had little work to do until late in the game, as Massimiliano Allegri's side expertly absorbed Barcelona's high-paced passing attack that ultimately produced few good scoring opportunities.

And when Lionel Messi did get free inside the area, Barcelona's all-time leading scorer squandered both his chances to spark a fight back.

The only miracle seen in Barcelona this time was Juventus not getting a late goal with the Spanish side barely having legs to recover on defence.

The result ended Barcelona's run of 15 wins in as many home European matches since the arrival of coach Luis Enrique, who will leave the club this summer.

Barcelona must rest and regroup for Sunday's trip to play Real Madrid in a "clasico" match that will go a long way to deciding the Spanish league title.

Monaco reached the final four after beating Borussia Dortmund 3-1 on Wednesday for a 6-3 aggregate win.