Christine Sinclair scored twice and Canada went on to secure a spot in next year's World Cup in France with a 7-0 victory over Panama on Sunday in the semifinals of the CONCACAF qualifying tournament.

Sinclair scored twice and Canada went on to secure a spot in next year's World Cup in France with a 7-0 victory over Panama on Sunday in the semifinals of the CONCACAF qualifying tournament. 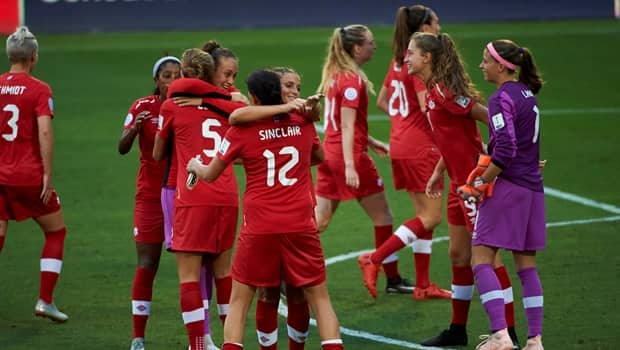 2 years ago
1:33
Christine Sinclair and Adriana Leon each scored a brace as Canada thumped Panama 7-0 in the semifinals of the CONCACAF Women's Championship. The win gives Canada a berth in the 2019 FIFA World Cup. 1:33

Sinclair now has 177th international goals. She ranks second on the career list — among both men and women — behind former U.S. forward Abby Wambach's record of 184 goals.

"It's my teammates that keep reminding me of it," she smiled. "Especially in this tournament, it's just all about qualifying."

Adriana Leon, who came in as a sub for Sinclair in the 68th minute, also scored a pair of goals.

The United States defeated Jamaica 6-0 later Sunday night in the other semifinal match at Toyota Stadium. The U.S. team, ranked No. 1 in the world, is the defending champion of the sport's premier event, having won the final in 2015 against Japan in Canada.

'It's massive for us'

The final and third-place match are set for Wednesday night. The top three finishers in the CONCACAF Women's Championship will represent the region in France, so the winners of both semifinals earn a berth. The fourth-place finisher will face Argentina in a playoff for a spot.

Canada, ranked No. 5 in the world, will make its seventh World Cup appearance. The only time Canada has missed out on the game's premier tournament was in 1991, the event's first year.

"It's massive for us," Sinclair said. "It was obviously our goal coming into this tournament. It's getting more and more difficult qualifying out of CONCACAF, you see different teams making it the semifinals, with Panama and Jamaica making it."

Canada had the best chances in the first half, including Allysha Chapman's shot in the 12th minute that was just off target and hit the side of the net, before Sinclair broke through.

Jesse Fleming added another goal for Canada in the 48th minute, a short time before Sinclair's second. Janine Beckie and Rebecca Quinn also scored before Leon's brace. Leon has six goals in the tournament. 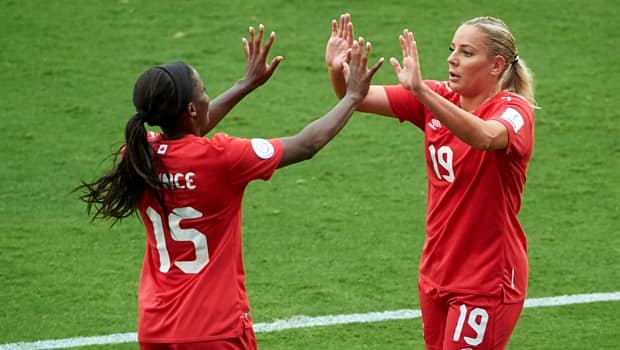 2 years ago
1:11
Adriana Leon and Christine Sinclair each scored a brace as Canada thumped Panama 7-0 in the semifinals of the CONCACAF Women's Championship. The win gives Canada a berth in the 2019 FIFA World Cup. 1:11

"The first half wasn't really what we wanted it to be but we went into the locker room and said that we needed to get a bit more pace getting into the box, a bit more aggression getting into the box, and people wanting to get on the end of crosses." Fleming said. "We're pretty excited. Qualifying was our main goal coming into the tournament and now we get an opportunity to play against either the U.S. or Jamaica in the final."

Diana Matheson made her 200th appearance for Canada. The midfielder has played for the national team since 2003.