Adriana Leon and Jordyn Huitema each had four goals in Canada's dominating 12-0 victory over Cuba on Monday night in the group stage of the CONCACAF Women's World Cup qualifying tournament.

Adriana Leon and Jordyn Huitema each had four goals in Canada's dominating 12-0 victory over Cuba on Monday night in the group stage of the CONCACAF Women's World Cup qualifying tournament.

Canada, ranked No. 5 in the world, needed a big result against No. 88 Cuba after Jamaica's surprising 1-0 upset of Costa Rica earlier in the day in Group B at HEB Park. 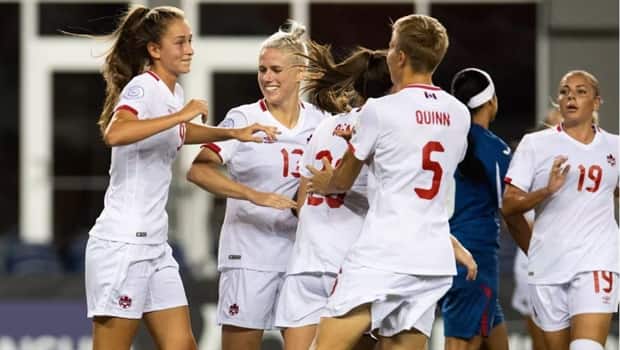 2 years agoVideo
0:47
Adriana Leon and Jordyn Huitema each scored 4 goals to help lead Canada to a 12-0 win over Cuba on Sunday night in Texas. 0:47

"It was a great win, good performance. What we talked before this match was that no matter what we keep our standards high in respect to our opponents, fans that were watching, and the game, said Canada coach Kenneth Heiner-Moller. "I'm very pleased."

Matheson made her 198th appearance for Canada, while Sophie Schmidt earned her 175th cap.

Canada, which beat Jamaica 2-0 in its opener, plays Costa Rica on Thursday in its final group stage match.

"We've been preparing for three very different opponents in this group stage and we've prepared for a challenging match against Costa Rica, but we are really looking forward to it as well," said Heiner-Moller.

Group A, which is playing in Cary, North Carolina, includes the defending World Cup champion United States. The top two finishers in each group advance to play in the semifinals in Frisco, Texas, next Sunday.

The top three finishers in the tournament earn spots in the Women's World Cup in France next summer. The fourth-place finisher goes to a playoff against Argentina for a berth.