World Cup goes on without Canada

Amid Canada's struggle for wins, experts say the soccer program needs an overhaul if it stands any chance at joining the world’s best at future World Cups. 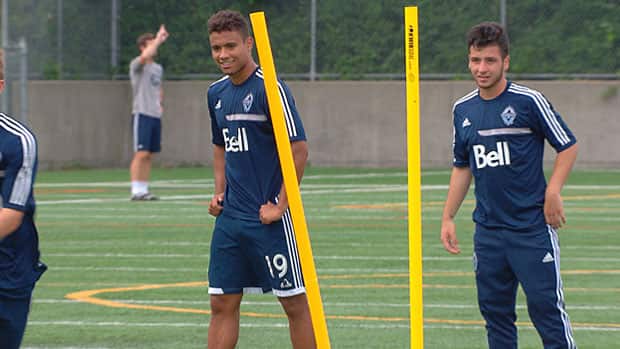 7 years ago
1:41
Friends Marco Bustos and Kianz Froese on their soccer dreams 1:41

Canada’s men’s national soccer team will miss out on the FIFA World Cup for a seventh straight time as the world’s top soccer countries gather in Brazil this summer.

But amid the struggle for wins, experts say the program needs an overhaul if it stands any chance at joining the world’s best at future World Cups.

Canada hasn’t won a match since beating Cuba 3-0 in October of 2012 and is ranked 110th in the world in the most recent FIFA rankings.

“[People’s] first impression is not positive because everybody thinks Canada is a rich country so they don’t understand why it’s not a soccer power,” said men’s national team manager Benito Floro, who spent two seasons with Real Madrid.

Canada’s talent pool is shallow and some of the best players are refusing to stick around, choosing instead to play for other countries with better international prospects.

Scarborough-born Jonathan de Guzman passed on the chance to play for his native country, and will instead be on the Dutch squad for this year’s tournament. His brother Julian de Guzman chose a different route, and has been a mainstay on Canada’s national team for more than a decade.

Asmir Begovic will likely start in goal for Bosnia-Herzegovina at Brazil 2014, having elected to play for his birth country despite growing up in Edmonton and playing internationally for Canada during his teenage years.

The presence of the Vancouver Whitecaps, Toronto FC and Montreal Impact in Major League Soccer – the top competition in North America – was hoped to bolster Canadian talent.

But, Floro points out those teams each have fewer than a half dozen domestic players on their senior rosters.

“There is a need for a league for our young players to get regular soccer, regular training at a professional level,” said Carl Valentine, national team veteran and current under-16 staff coach for Vancouver Whitecaps FC. “That’s what we had in 1986.”

Twelve of 22 players on Canada's1986 World Cup roster played in various professional leagues across North America. In 2014, the most recent squad featured only five of 24 players that played on their home continent.

Valentine and the Whitecaps are aiming to change that.

Seven years ago, the team set up its residency program: an intense, comprehensive, full-time training regime modeled after those of European clubs, and designed to prepare young players for the professional ranks.

That narrow focus on developing elite-level talent is a big shift from the previous approach where the team would select and develop high school players in the hope of selling them to wealthier clubs, typically in Europe.

Now instead of one youth squad, the Whitecaps have a structure with several age-tiered squads.

“Our intent is to give the best prospects in Canada the best environment and opportunity to succeed in soccer,” said Craig Dalrymple, technical director of the Whitecaps residency program.

Eighteen-year-old Marco Bustos left his Winnipeg home as one of about 60 players from across Canada invited to try out for the Whitecaps’ residency program. After a tryout, he was one of the 10 to 12 prospects selected to join the residency program that year.

The program admits players as young as 12 years old. Backed by ownership funding, recruits attend school on a modified schedule, but otherwise focus on soccer with comprehensive training on tactics, technique, psychology and nutrition. Teams travel as far as California and Florida to play against the best competition, and practice alongside the Whitecaps first team squad.

“Playing with all the professionals makes you feel like that’s what you want to be,” said Bustos.

The team hopes developing players like him will pay off for team Canada as well.

Sam Adekugbe, Russell Teibert, and Bryce Alderson all graduated from the program and earned places on the senior team roster. And, the Whitecaps fielded five starters from its youth team in a Canadian Championship match versus Toronto FC earlier this month.

“Our success is defined by players entering the professional ranks and entering the senior national team,” said Dalrymple.

The Whitecaps say that their residency program put 35 players into national team programs from the under-15 level to the senior team in the last four years alone.

It’s banking on those graduates becoming stars for soccer fans in Vancouver and across the country.

“We need that light at the end of the tunnel," said Dalrymple. "And that light is our World Cup team having success.”