Canadian teenager Alphonso Davies made his Bundesliga debut Sunday, coming off the bench in the 86th minute of Bayern Munich's 4-1 home win over VfB Stuttgart.

Canadian teenager Alphonso Davies made his Bundesliga debut Sunday, coming off the bench in the 86th minute of Bayern Munich's 4-1 home win over VfB Stuttgart.

He arrived two minutes after Polish international Robert Lewandowski, making up for an earlier missed penalty, scored to make it 4-1 with his 99th goal in all competitions at Allianz Arena. Davies took up an advanced position on the left side of the field before the crowd of 75,000.

Davies joined Bayern (13-3-3) from the Vancouver Whitecaps in an MLS record-breaking $22-million US transfer deal that runs through 2023. The deal was done in July but Davies finished out the MLS season before joining Bayern this month.

Bayern boss Niko Kovac named an unchanged side from the team that beat Hoffenheim 3-1 nine days ago to mark the Bundesliga's return to action after its traditional winter break. Davies was also on the bench that day and did not see action.

Second-place Bayern, after its seventh straight league win, moved within six points of league leader Borussia Dortmund. Unbeaten in seven, its last Bundesliga loss was a 3-2 defeat at the hands of Borussia Dortmund on Nov. 10.

Davies did start in Bayern's penalty shootout win over Borussia Moenchengladbach in the final of the Telekom Cup, a four-team competition held during the winter break. Prior to that, he took part in Bayern's week-long training camp in Doha. 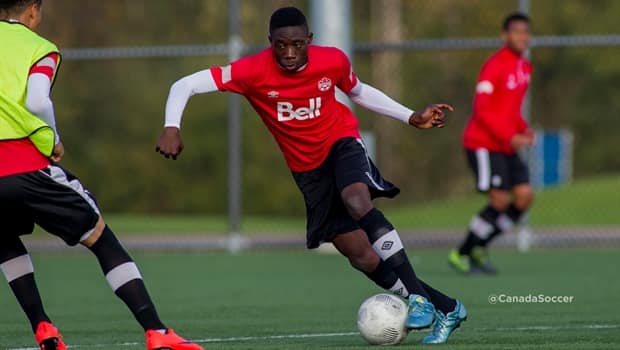 How, as a coach, do you unlock the potential of a young player like Alphonso Davies?