It was a historic first for Canadian Nathan Smith. The Calgary native won the men's 12.5-kilometre pursuit race at a World Cup event Saturday. Smith becomes just the second Canadian to capture a World Cup gold medal after Jean-Philippe Leguellec of Kingston, Ont., did so in 2012. 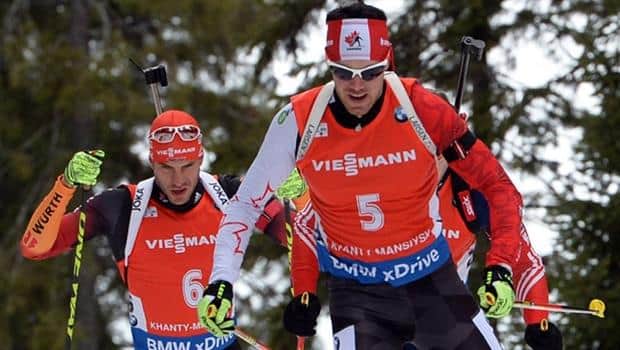 The Calgary native won the men's 12.5-kilometre pursuit race at a World Cup event Saturday. Smith becomes just the second Canadian to capture a World Cup gold medal after Jean-Philippe Leguellec of Kingston, Ont., did so in 2012.

Two weeks ago, Smith became the first Canadian to capture a medal at the Biathlon World Championships, earning silver.

"It's amazing," he said. "The last few weeks have been such a great way to end the season.

"It feels less surreal than last time. Winning the silver at World's was overwhelming. But this is my first win. This is huge for me."

Smith won the race in 30 minutes 51.5 seconds. Germany's Benedikt Doll finished 24 seconds behind in second while Russian Anton Shipulin was third, 35.7 seconds back.

Smith started fifth and the 29-year-old took advantage of misses by the frontrunners in his first two prone rounds of shooting. Skiing with the leaders for two laps, Smith shot clean for the third straight time on the range in his first standing where he took the lead and never looked back.

"I was really fatigued after the World Championships but with a few days off I recovered well," he said. "I was a little nervous heading into (Saturday) because of my good start position.

"I just had a feeling. I felt like it was going to be a good day."

Two-time Olympic champion Myriam Bedard is the only other Canadian to earn medals at both the Biathlon World Championships and on the World Cup.

"There is definitely a mental barrier you have to cross to get on to the podium," said Smith. "If you keep getting top-10s it is eventually going to happen, but until you realize that goal, you don't believe it will.

"I think drawing on those experiences helps you get there. Earlier this year in Oestersund I was in this position for a podium and missed my last three standing. I thought about Oestersund all day today. I was more mentally prepared to deal with the situation this time."

In the women's race, Rosanna Crawford of Canmore, Alta., was 13th in 30:33.3. Darya Domracheva of Belarus won gold in 28:14.4, finishing ahead of Germans Laura Dahlmeier and Franziska Preuss.