Canada's Manny Osborne-Paradis gets a congratulatory kiss from his wife Lana after finishing in a second-place tie in the season's first World Cup downhill at Lake Louise. 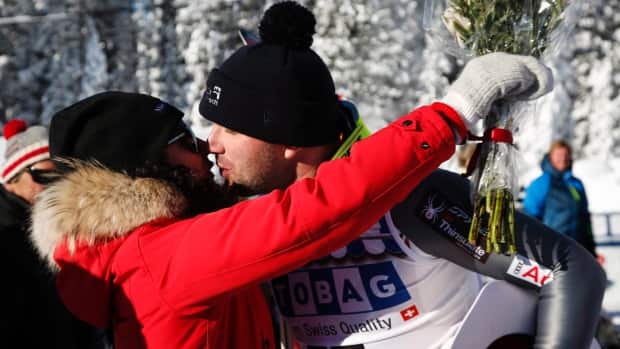 Canada's Manny Osborne-Paradis had an excellent opening to the World Cup season, taking silver in the men's downhill at Lake Louise, Alta.

Norway's Kjetil Jansrud won the race in one minute 50.20 seconds, while Osborne-Paradis of North Vancouver and Guillermo Fayed of France tied for second in identical times of 1:50.34.

Two of three training runs for the World Cup in Lake Louise, Alta., were cancelled due to weather. Jansrud and Osborne-Paradis were first and second respectively in the only training run for the race.

"That first training run was probably the best training run in the history of my career," Osborne-Paradis told CBC Sports. "I feel very comfortable on my skis right now."

It's the first victory at Lake Louise for Jansrud, who won the Olympic gold medal in super-G and bronze in downhill this year.

"I'm in better shape than I normally am [at this time of the season]," he added.

Lake Louise hosts the men's Super-G on Sunday. You can watch it live on CBCSports.ca, starting at 1 p.m. ET (CBC TV will broadcast the race at 3 p.m. local).