Wolfpack hold off Toulouse to take top spot in league

Liam Kay made a try-saving tackle and scored one of his own as the Toronto Wolfpack held off Toulouse Olympique 24-22 to claim top spot in the Betfred Championship on Monday.

Liam Kay made a try-saving tackle and scored one of his own as the Toronto Wolfpack held off Toulouse Olympique 24-22 to claim top spot in the Betfred Championship on Monday.

The Wolfpack — wearing their Canadian-themed kit for the trip to southern France — led 20-6 at the half, but Toulouse rallied in the second half with three unanswered tries to close the deficit to two points in a thrilling match between two of the league's best rugby teams. 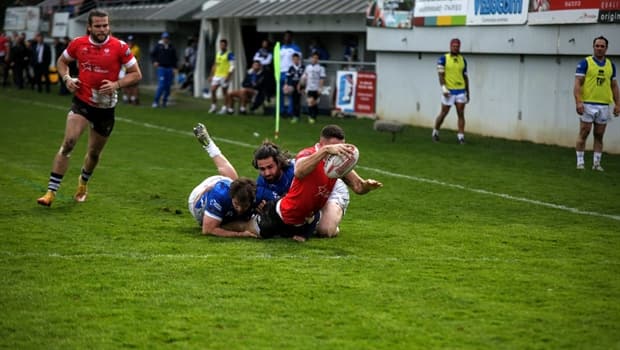 Game Wrap: Wolfpack down Olympique in battle of league's best

3 years agoVideo
5:00
The Toronto Wolfpack edged the Toulouse Olympique 24-22 and jump into the top spot in the Betfred Championship table. 5:00

In addition to Kay's late-game heroics, Toronto's defence came up with several key stops on their own try line, including a pivotal tandem tackle in the in-goal area early in the second half to deny a Toulouse score. The Irish international was named man of the match for his efforts.

Nick Rawsthorne had two tries, with Jonny Pownall and Andy Ackers also scoring. Ryan Brierley was 2-for-5 on conversion kicks — including one that hit the uprights and stayed out — and missed a late drop goal.

The Wolfpack (7-1-1) now sit one point ahead of Toulouse (7-2-0) in the second-tier rugby league standings after winning both matches over the Easter weekend; the team topped the Featherstone Rovers 24-16 on Friday.

Toronto is back in action April 8 against the Batley Bulldogs at 10 a.m. ET..

All Wolfpack games can be streamed live at CBCSports.ca.