The Toronto Wolfpack will make their Super League debut Feb. 2 against the Castleford Tigers and the transatlantic rugby league team will play its first home game in Round 11, on April 18 against Hull FC at Lamport Stadium.

The Toronto Wolfpack will make their Super League debut Feb. 2 against the Castleford Tigers.

The transatlantic rugby league team will play its first home game in Round 11, on April 18 against Hull FC at Lamport Stadium.

It will be a tough introduction to the top tier of Northern Hemisphere rugby league. Toronto's first five opponents — including defending champion St. Helens — all finished in the top five of the table last season. 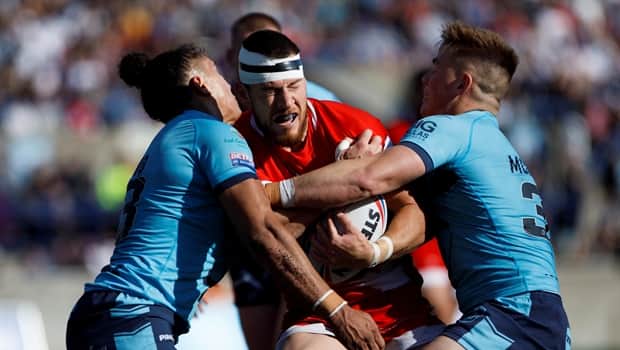 1 year agoVideo
2:14:41
The Toronto Wolfpack take on the Featherstone Rovers at Lamport Stadium in the Million Pound Game. 2:14:41

In all, nine of Toronto's first 10 games will be played in England with the other in France.

"There is clearly a lot of excitement with Toronto Wolfpack coming into Super League and we've had to work through a number of logistical challenges regarding their fixtures," Rhodri Jones, Super League's chief commercial officer, said in a statement.

The Wolfpack will play 11 of their last 19 games at home with the season wrapping up Sept. 11 with all 12 teams in action.

Toronto's season opener in February is part of a doubleheader at Emerald Headingley Stadium in Leeds, England, with Leeds Rhinos playing Hull FC in the second game.

The 2020 Super League season opens Jan. 30 when the Wigan Warriors host the Warrington Wolves, winners of the 2019 Challenge Cup.

Toronto started play in the third tier of English rugby league in 2017, winning promotion to the second-tier Betfred Championship after topping League 1 in its debut season.

The Wolfpack fell one win short of promotion to the top-tier Super League in 2018, but went all the way in October with a 24-6 victory over Featherstone in the Million Pound Game.

Toronto replaces the London Broncos, who were relegated after one season in the top tier. The Broncos won promotion in 2018, beating Toronto 4-2 in the Million Pound Game.