The weather was poor, the venue rudimentary and the game churlish. But when the dust settled Saturday, the Toronto Wolfpack celebrated their first win on Canadian soil after thumping Oxford RLFC 62-12. 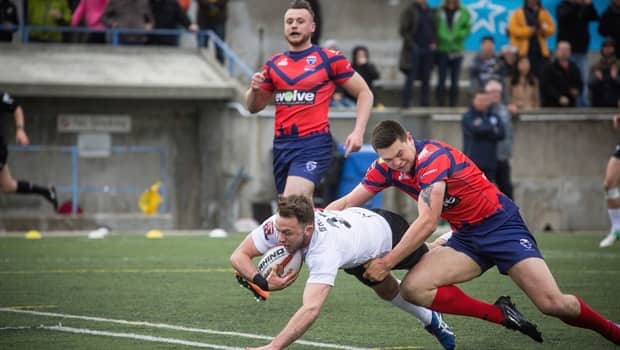 The weather was poor, the venue rudimentary and the game churlish. But when the dust settled Saturday, the Toronto Wolfpack celebrated their first win on Canadian soil after thumping Oxford RLFC 62-12.

Inside its spartan dressing room at Lamport Stadium, rugby league's first transatlantic team launched into its victory song, clapping and singing "Wolfpack's on Fire," before spraying each other with water and falling into a bouncing, jubilant mass of humanity on the floor.

It's hard not to like this largely transplanted English side, which wears its heart on a very muscular sleeve. Or the bruising game it plays.

"You can see how it's going to build into something magnificent," Wolfpack coach Paul Rowley said of the marriage between rugby's 13-man code and North America. "The fans love it. A bit of everything as promised. So we delivered, they delivered. And welcome rugby league to Canada.

"We always labelled it as the best-kept secret and now the secret's out of the box. I think it's a win-win." 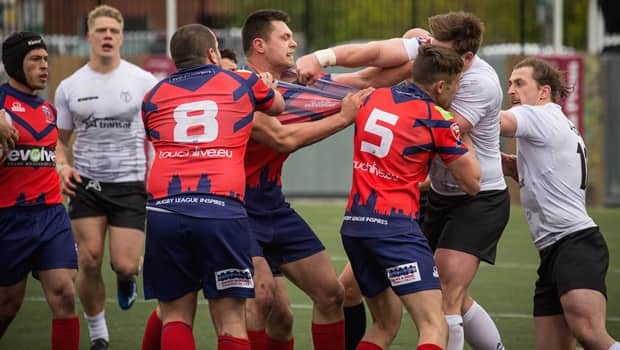 4 years ago
3:29
Toronto's Jake Emmitt and Blake Wallace were ejected along with Oxford captain Callum Windley following a donnybrook in the 2nd half. Toronto won the match 62-12. 3:29

An enthusiastic crowd, announced at 6,281, saw 14 tries, three red cards and two yellows in a game that featured several punch-ups resembling old-time hockey line brawls. Toronto finished with 10 men after Jake Emmitt and Blake Wallace were red-carded after a brawl that started in the 71st minute.

"That's what you get when you mix amateurs with pros," said Rowley, whose fully professional side is currently tangling with semi-pros teams in the third tier of English rugby league.

Still there can be no excuses for Emmitt, initially yellow-carded for slapping an Oxford player as he tried to play the ball. He took his time leaving the field before, objecting to some parting words from an opponent, the six-foot-one 240-pound Welsh international threw several punches and a donnybrook ensued.

Rather than dwell on his indiscipline, Emmitt walked to the north side of the field and shook hands with fans standing in front of a line of beer tents.

Toronto's Liam Kay was yellow-carded earlier in the half.

Rowley said the flashpoints were fuelled by a string of incidents that were not policed properly.

"We shouldn't react," he said. "But what I will say is you only get punched so many times. We'll protect ourselves. We're not soft, we're not mugs. I would expect my players to protect themselves. If the officials can't protect us, then we'll do it ourselves. But it just ruins the game really.

"The correct manner of doing it is to deal with the perpetrators from the off and that wasn't done today, in my opinion. But we should be better, definitely."

The last try came from Burroughs, an American army veteran whose rugby league journey has taken him from Virginia to Australia and England and now Toronto.

The Toronto home debut, on a grey moist day, came 375 days after the ground-breaking franchise was announced.

The Wolfpack are starting life in the Kingstone Press 1 — with an eye to winning promotion to the second-tier Championship and then the elite Super League.

While ostensibly playing out of Toronto, the players live and train on the other side of the Atlantic in northern England, where rugby league is popular. Home games are actually away fixtures.

The Wolfpack are willing to spend money to make the travel work. The franchise, aided by a sponsorship deal with Air Transat, agreed to pay travel and housing costs for all visiting teams until Toronto climbs its way to the Super League.

An Oxford player said the team had been up about 24 hours before they could finally put heads to pillow in Canada. They also had to change locales after their first university residence was found wanting.

The league-leading Wolfpack have dominated their semi-pro opposition, winning all six of their matches with a 372-49 scoring edge. Their one competitive loss, a 29-22 decision, came at the hands of the Super League Salford Red Devils in the knockout Ladbrokes Challenge Cup.

It's just a short stop in Toronto this time for the Wolfpack, who leave Tuesday for a game Friday at the Newcastle Thunder. Then it's another plane ride and a pair of games in Toronto.

The Wolfpack home, at least to start with, is 42-year-old Lamport Stadium, a no-frills 9,600-capacity venue.

The fans were restricted to the east stand to start with but were allowed into the west stand as numbers grew. There was a festive feel to the game, helped no doubt by the craft beer tents.

During halftime, the crowd was entertained by the She Wolves, the club's cheerleaders. And during the game, the PA announcer repeatedly asked the fans to howl their approval.

"I can't believe there's this many people, to be honest," said Alistair Wilson, a native of Blackpool, England, currently living in Canada.

A soccer fan, he came to the home opener "to see a bit of history."

"I love it. It looks good," added David Bailie, who drove in from Guelph to see the game. "We'd come again."

Some fans wore Wolfpack gear with a nearby team shop doing brisk business.